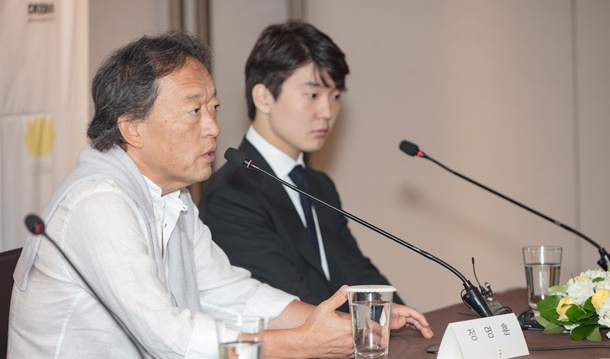 Recording great performances of classical music with the best audio quality has been the mission of Deutsche Grammophon since 1898. The list of artists who have collaborated with the classical music record label reads like a roll call of the greatest musicians of the past century.

The event will take place from Dec. 6 to 7 at the Seoul Arts Center in southern Seoul and kick off with Cho performing Mozart’s Piano Concerto No. 20.

“It was an honor to work with Deutsche Grammophon for my first recording and for this meaningful gala concert,” Cho said at a news conference announcing the gala concert at the Plaza Hotel in central Seoul on Monday. “I first performed the Mozart piano concerto in 2011 with Maestro Chung and the Seoul Philharmonic Orchestra, so I am happy that I am able to return back to this song with him.”

The gala’s second day will feature the Seoul Philharmonic Orchestra under the baton of Chung and featuring Mutter.

The motto of the 120th anniversary concert - if music be the food of love, then play on - comes from Shakespeare’s “Twelfth Night,” said Clemens Trautmann, president of Deutsche Grammophon.

“We at Deutsche Grammophon would like to play on for the next 120 years,” Trautmann said. “It is no coincidence that we are celebrating our birthday here as we take pride in our longstanding relationship with our artists and because we have always been a global label.

“Inspiration of the celebration came from the Korean team,” he added, “and we very much look forward to celebrating with all the loyal fans in Korea.”

Chung quipped that “I personally do not like recording classical albums, but I do believe that recordings help the orchestra develop,” he said, “which is why I chose to participate in this meaningful gala concert with Deutsche Grammophon.

“It is especially meaningful that a Korean orchestra was able to team up with a legendary international recording like Deutsche Grammophon.”