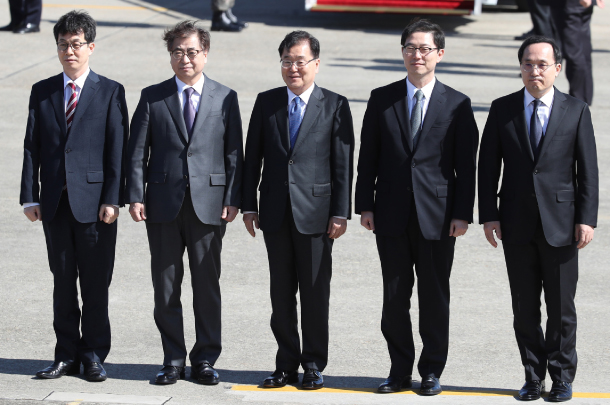 President Moon Jae-in’s special envoy to North Korea departs for Pyongyang on Wednesday, but it remains unclear whether the delegation will be able to meet North Korean leader Kim Jong-un as they did on their last visit in March.

The Blue House revealed on Sunday that Chung Eui-yong, the national security adviser, would be Moon’s special envoy to Pyongyang. The visit comes at a critical time for denuclearization talks between the United States and North Korea.

At the meeting, Moon requested bipartisan support in the National Assembly for his government’s North Korea agenda and efforts to fulfill the Panmunjom Declaration that both leaders signed at their summit on April 27, “which would be greatly helpful in progressing peace on the Korean Peninsula.”

It is the same group that traveled to Pyongyang in March to meet with Kim Jong-un and lay the groundwork for an inter-Korean summit, but unlike last time, their upcoming trip will last one day instead of two.

Unclear is whether the delegation will get to meet the North Korean leader this time around. During the first trip, they spoke with Kim Jong-un for over four hours and made several agreements, including holding the inter-Korean summit in April, opening a hotline between the two leaders and discussing denuclearization.

That special envoy visit in March continued the state of rapprochement from the PyeongChang Winter Olympics in February and played a decisive role in advancing inter-Korean relations. Chung also played the role of mediator between Kim Jong-un and U.S. President Donald Trump by conveying Kim’s message to Trump, leading the two leaders to ultimately meet in June.

On the North’s end, there were also indications that they were ready to negotiate when Chung visited Pyongyang in March. The leader’s younger sister, Kim Yo-jong, who is also first vice director of the Central Committee of the North’s ruling Workers’ Party, and Kim Yong-chol, a vice chairman of the Central Committee, visited the South for the Olympics, meaning decisions had already been made at a high level.

This time, however, the circumstances are different. Denuclearization talks between the North and United States are deadlocked. North Korea is frustrated with South Korea over how slowly projects agreed upon by both countries are progressing. And the equation has been further complicated by China and Japan’s injection into Korean Peninsula issues.

One of the expressed tasks of the special envoy will be scheduling an inter-Korean summit to be held in Pyongyang later this month. The meeting will be Moon’s third with Kim Jong-un. Other items on the agenda include advancing inter-Korean and North-U.S. relations.

A clear determinant of the special envoy’s successful visit to Pyongyang would be if Chung gets to meet with Kim Jong-un on the day-long trip, since only the North Korean leader can resolve the current standoff in talks.

Jeong Se-hyun, a former South Korean unification minister, said, “In 2003, President-elect Roh Moo-hyun sent a special envoy to Pyongyang, but he didn’t get to meet with North Korean leader Kim Jong-il. That is because it was impossible to advance nuclear negotiations.”

Similarly, U.S. Secretary of State Mike Pompeo visited Pyongyang in early July but was unable to meet with Kim Jong-un that time, unlike his two previous trips this year.

Kim Jong-un also did not meet with Chinese President Xi Jinping’s special envoy to Pyongyang, Song Tao, head of the Chinese Communist Party’s International Liaison Department, last November, at the height of tensions on the peninsula, claiming he was busy with his domestic schedule.

Given precedent, Kim Jong-un’s snub could be interpreted as a message of discontentment with the process. It is likely that Kim Yong-chol will first hold talks with the special envoy and see what he brings to the table, and if the talks are fruitful, that could lead to a meeting with the North’s leader.

Kim Jong-un will likely try to read the messaging from Moon and Trump and try to confirm their position on such pressing matters as a declaration to formally end the 1950-53 Korean War, which concluded with an armistice agreement rather than a peace treaty. The issue has been a sensitive topic in inter-Korean relations.

“Chairman Kim until last year, when he hid from the public for over 10 days, conducted a military act such as a nuclear or missile test,” a South Korean government official said on the condition of anonymity, “but this year, he is hiding before bargaining or negotiating.”

The leader has been refraining from public activities for the past two weeks, a sign that he could be preparing for a meeting. In March, Kim Jong-un stayed out of the public eye for 17 days before meeting Moon’s special envoy.