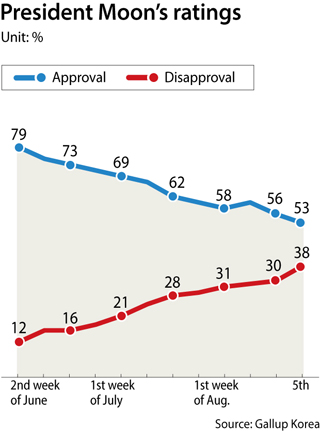 President Moon Jae-in’s approval rating fell to a new low of 53 percent last week, continuing a decline that shows little sign of a rebound amid concerns over the country’s economy and unemployment and little progress on North Korea’s denuclearization.

In a poll conducted by Gallup Korea from Tuesday to Friday of 1,000 adults nationwide, the president’s approval fell three points to 53 percent, his lowest since taking office in May 2017. It also represented a dramatic fall over the last two months. In the second week of June, when a historic summit between North Korean leader Kim Jong-un and U.S. President Donald Trump was held in Singapore, Moon’s approval soared to 79 percent on expectations of a breakthrough in a denuclearization deal.

Moon’s approval rating has fallen 26 percent over just two months with Pyongyang and Washington falling out of synch on North Korea.

The poll had a margin of error of plus or minus 3.1 percentage points.

In another poll by Realmeter conducted from Monday through Friday, Moon’s approval rating was 55.2 percent, down 0.8 percent from a week earlier.

The decline comes amid worries about Moon’s income-led growth policy, which appears to be wiping out jobs, particularly of vulnerable workers earning the minimum wage.

The controversy has led conservatives who supported the president to withdraw that support, although his liberal base continues to stand by Moon, Realmeter analyzed.

“With the intensification of a divide between the ruling and opposition parties over the income-led growth policy, conservatives have withdrawn their support for the president while liberals’ support has been strengthened during early days of the week,” the pollster said. But in the second half of the week, the approval rating was also negatively affected by a spike in real estate prices in Seoul and questions about the government real estate policies, according to the pollster.

While Moon’s rating remains higher than former presidents in their second year in office, analysts say if it falls below the 40 percent level, it could raise serious problems for the government and its agenda.

If a president’s approval rating falls below 40 percent, the ruling party could try to distance itself from the government, Bae Jong-chan, a senior researcher at pollster Research & Research said.

“If an approval rating is at 40 percent, it means there are more people disapproving of the president’s performance than those approving,” he said. “If that threshold is broken, the ruling party starts distancing itself from the Blue House.” If it drops to 25 percent, a president cannot exercise leadership anymore and will be unable to set any major policy agenda, he continued.

Former President Park Geun-hye, who was sentenced to 25 years in prison by an appellate court for corruption and abuse of power last month, saw her approval crumble to under 40 percent in her third year into office in early 2015. A year later, her party suffered a defeat in a general election and lost its majority in the National Assembly.

The lowest presidential approval rating ever was 6 percent for President Kim Young-sam in late 1997, his fifth year in office, when the country was hit by its worst economic crisis and forced to ask for a bailout from the International Monetary Fund.