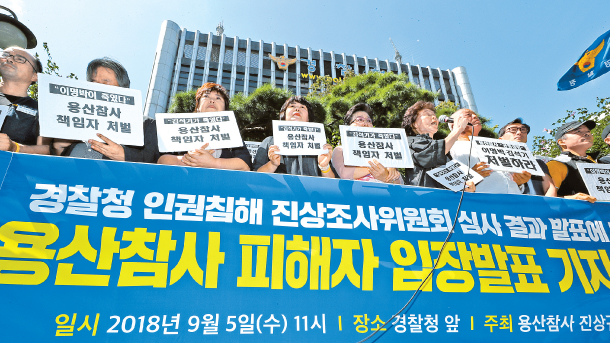 Family members of the victims of the Yongsan tragedy, a clash between police and tenants resisting eviction that resulted in six deaths in 2009, hold a news conference outside the headquarters of the National Policy Agency in central Seoul on Wednesday after a fact-finding committee announced the results of its probe. [YONHAP]

In January 2009, a clash between police and tenants resisting eviction from a redevelopment site in Yongsan District, central Seoul, led to a deadly blaze that killed six and injured dozens.

Nearly a decade later, the National Policy Agency acknowledged that officers had unreasonably carried out operations to repress protestors and said in a news conference on Wednesday that the victims’ families deserved an apology from the police leadership.

The clash between police and tenants claimed the lives of five protesters and a SWAT officer after a fire broke at the Namildang building in Yongsan District on Jan. 20, 2009.

Tenants had refused to vacate the building and demanded higher compensation for apartments and businesses being demolished as part of a redevelopment project.

As protesters continued to occupy the Namildang building, SWAT officers were dispatched to evict them. The tenants organized a sit-in on the roof of the building, and a fire erupted after protesters threw Molotov cocktails in an attempt to push back the officers.

A Seoul court convicted the protesters of interfering with government officials and killing a SWAT officer. They were sentenced to prison to the outrage of their families and activists sympathetic to the tenants.

In February this year, an internal fact-finding committee in the National Police Agency began investigating possible human rights violations during the Yongsan tragedy. The committee found that the police had moved too quickly to forcefully evict the protesters by deciding to dispatch a SWAT team 25 hours after the sit-in began. The committee judged that the police did not spend enough time trying to convenience the protesters to leave.

When the SWAT team did arrive, it found flammable material, including paint thinner, on the roof and advised officers to pull back the operation. Police leadership ignored this, according to the probe’s findings.

The committee found that the fire rescue dispatch was also inadequate. In a similar police operation at an Osan, Gyeonggi, rooftop in 2005, 23 fire trucks were sent. In Yongsan, there were only two.

The police also did not properly set up emergency exits, according to the committee, and there were not enough cranes and air mattresses.

The police’s response in the aftermath was also inappropriate, the committee said.

After the fire, the National Police Agency had 900 of its cyber command officers post comments and take part in online opinion polls to quell public criticism on social media.

Family members of the victims did not receive proper autopsy reports, either, the committee found.

The families and their supporters gathered on Wednesday after the committee released its report and demanded appropriate punishment for police leadership at the time, including Kim Seok-ki, then chief of the Seoul Metropolitan Police Agency.

At the time of the Yongsan incident, Kim had been tapped by then-President Lee Myung-bak to lead the National Police Agency. Kim withdrew himself from consideration the next month in response to public backlash.