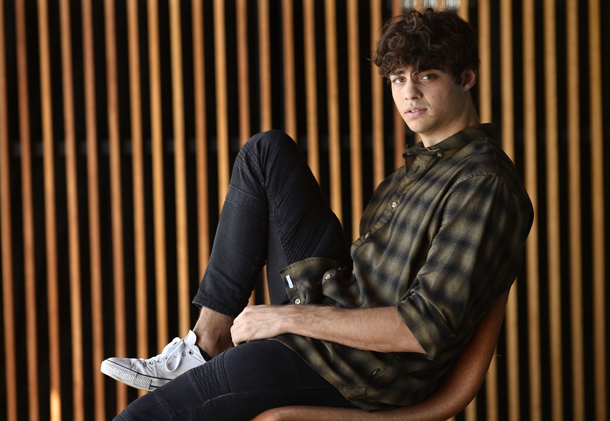 Actor Noah Centineo has been playing many different roles for romantic comedy shows on Netflix recently, making himself popular on social media. [AP/YONHAP]

LOS ANGELES - If you have a Netflix account, chances are you recognize actor Noah Centineo. Although, like the best teen heartthrobs of generations past, you’d be forgiven if you only know him by his character’s name: Peter Kavinsky, the high-school lacrosse-playing romantic from “To All the Boys I’ve Loved Before.” And yes, like Jake Ryan (“Sixteen Candles”) and Jordan Catalano (“My So-Called Life”) before him, both names are required.

Since “To All the Boys I’ve Loved Before” hit the 125-million subscriber streaming service on Aug. 17, Peter Kavinsky has become a mini phenomenon, inspiring memes, tweets and think pieces from every corner of the internet about why Peter Kavinsky and his woke, pocket-twirling ways is the boyfriend we need right now. Centineo, 22, got over one million new Instagram followers in a day. Two weeks later it was up to six million. Now, it’s sitting at over 8.2 million. And this Friday, he’ll grace the small screen again as Netflix drops another high school rom-com, “Sierra Burgess is a Loser” into the homes of newly-minted Centineo fans. (An internet campaign has already started to give his lovesick character Jamey a last name).

“Luckily Twitter exists on a two-dimensional plane,” laughed Centineo on a recent afternoon at Netflix’s headquarters in Los Angeles. “It’s not like I have six million plus people walking around with me every day. That would be insane.”

The “instant” stardom has been a long-time coming for Centineo, a Florida-native who decided he wanted to act at the age of eight. At 15, after appearing on the Disney Channel’s “Austin & Ally,” he convinced his family to move out to Los Angeles full-time. When he arrived, he was always working and auditioning, but it was, as he describes it, “a slow climb.”

In fact, right before he was cast on the Freeform show “The Fosters” at age 18, he had a crisis of confidence wondering if he should even be an actor. He wasn’t able to book jobs or go out on auditions for six months because of a Disney pilot that never ended up going to series and felt that he’d lost his sense of purpose.

“It got dark,” Centineo said. “I’m like what am I doing with my life? Who cares if I’m an actor? Who cares if I’m successful? And as soon as I realized yeah this isn’t for me ... my life, my career, everything I do should be for others, there should be a deeper purpose outside of wanting to get money and be famous and live my own passion, that’s when ‘The Fosters’ hit and I don’t believe in coincidence.”

And then came one-two punch of “To All the Boys I’ve Loved Before” and “Sierra Burgess is a Loser,” both via the same casting director. “Sierra Burgess” shot first, in early 2017. The film stars Shannon Purser (aka Barb from “Stranger Things”) as a girl who finds herself in a texting relationship with Centineo’s Jamey, a football player with a nerdy side who believes he’s talking to a different girl (a cheerleader).

“What I love about Jamey is how he’s goofy and he’s a jock and he’s like ‘Yo, we are allowed to be both sides of the spectrum in one human being,” Centineo said. “I like Peter K because the boy is an egomaniac. He’s definitely not as smart as Jamey, but he’s sensitive, and a bit more extreme but still really loving and protective.”

Centineo almost sabotaged his “To All The Boys I’ve Loved Before” audition by arriving late to the chemistry read with Lana Condor. He was given the wrong address and was mortified about it. As soon as he left, he had a dozen Sprinkles cupcakes sent over to the folks in the room, including director Susan Johnson.

“He’s just charming. He can’t not be charming,” said Johnson. “I pulled him aside at the end of the shoot and said, ‘You can go wherever you want to go and do any role you want to do. You have that much of a gift and I hope you’ll be super choosy.’ He’s more than just the guy who is charming and cute on screen. He has depth to him that I think everyone is going to be excited to see in future roles.”

And, to be fair, Centineo thought he was doing two indies. Neither was a Netflix movie when he signed up and both were acquired by the service as part of a “summer of love” push and set for release within three weeks of one another. Needless to say, he’s taking this moment in stride.

“I’d like to think that my big break has yet to come,” he said. “I like to think everything has been slowly progressing toward the ultimate picture. Of what I don’t know, but we’re still painting.”

And he has lofty artistic ambitions in movies and beyond - art, philanthropy, music - and would like to work with directors like Gaspar Noe, Terrence Malick, Wes Anderson, the Coens and the Nolans.

Now, he’s just grateful, although there is the distinct impression that he is a little reticent to talk about his vast new following.

“I recognize the gravity of the situation and I recognize how much responsibility comes with it,” he said. “It’s like if you’re an actor your whole life you’re working and working and you’re trying to get into this forest with this big monster and you finally get into the forest with monster and it can be really nice to you, but at a moment’s notice it can turn around and eat you. I’m finally in the forest and wondering what’s going to happen. It’s fun.” AP