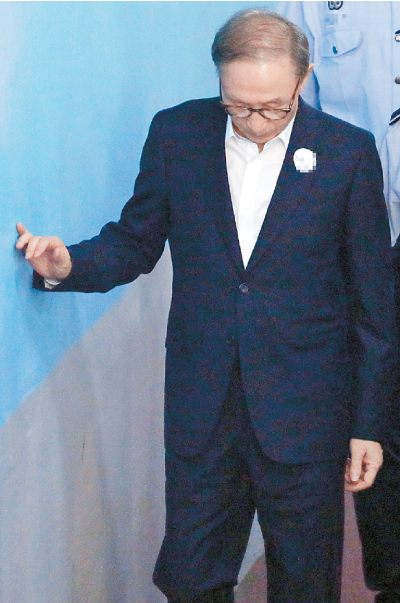 Prosecutors requested a 20-year sentence for former President Lee Myung-bak on Thursday on charges of corruption, bribery and power abuse.

The judges plan to issue their verdict early next month.

Lee served as president from 2008 to 2013 and was indicted in April on 16 counts of corruption ranging from bribery and abuse of power to embezzlement. He has been in detention since late March.

Lee, 76, is the fourth Korean president to face a criminal trial after Chun Doo Hwan, Roh Tae-woo and Park Geun-hye. Park is serving a 25-year sentence for corruption, though she has appealed her case.

Lee is accused of taking about 11.1 billion won in bribes from the National Intelligence Service, the former head of a state-owned bank and Samsung Electronics. About half the money, 6.5 billion won, allegedly came from Samsung to settle a lawsuit involving DAS, an auto parts company.

The charges center on long-held suspicions that Lee is the real owner of DAS and used his presidential powers to benefit the company, himself and his family. Prosecutors suspect he embezzled about 35 billion won from DAS for personal use. They charged him for illegally shipping over 3,400 presidential documents out of the presidential office and stashing them in a private building.

The scandal has tainted Lee’s image as a self-made man who started off as a salaryman and rose to the top post at one of the country’s leading companies in only 11 years before he entered politics in 1992.

Lee has insisted the trial is political retaliation by President Moon Jae-in over the death of President Roh Moo-hyun, Lee’s predecessor.

Roh committed suicide in 2009 while under investigation for a slew of corruption allegations.

Lee’s associates have claimed that Moon, who served as Roh’s chief of staff, is trying to force the same humiliation on Lee.

The charges against Lee are punishable with up to life imprisonment. Given his previous status as president, and the fact that he has pleaded not guilty and even refused to testify in court, legal analysts had predicted that prosecutors would likely demand at least 20 years.