‘Show Me the Money’ gets a revamp: The popular hip-hop competition has a new betting-based format

‘Show Me the Money’ gets a revamp: The popular hip-hop competition has a new betting-based format 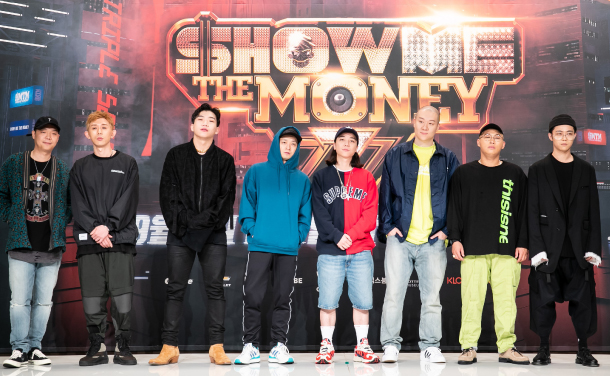 The producers of the rap battle program “Show Me the Money” at a press event on Friday. They include rappers The Quiett, fourth from left, and Nucksal, fourth from right. [CJ ENM]

The controversial rap battle program “Show Me the Money,” has returned for its seventh season on Friday, and as usual, it’s generating plenty of buzz. Following its premiere, the show’s promising new contestants, including Nafla and Coogie, dominated portal site Naver’s trending search results.

Throughout its history, “Show Me the Money” has been criticized by professional rappers for commercializing hip-hop. It’s also faced criticism for deceptive editing, as the show’s producers mix and match unrelated scenes in ways that distort the intended meaning of speakers. All this criticism, however, helped put the show at the center of attention, and raised the profiles of underground rappers like BewhY and Mad Clown.

The biggest change in the seventh season is the adoption of a betting system. In previous seasons, only the winner received a cash prize. In this season, however, four pairs of producers will bet a certain amount of money on the rappers after hearing their performance. Each team of producers is given 50 million won ($44,370), and the total prize money on offer has doubled from 100 million to 200 million won this season. This year’s eight producers are Swings, Giriboy, Deepflow, Nucksal, The Quiett, Changmo, Code Kunst and Palo alto.

The standard for how producers will evaluate participants will also diverge from previous seasons.

“Up until the sixth season, the most important factor to win was how well the participant could rap, which was mostly determined by how accurately they could keep to the beat,” said producer Swings at a press event held in western Seoul on Friday. Swings appeared in the second season of the show as a participant.

“But this season will focus on how well rappers can express themselves and demonstrate their identity through rap in a creative and distinct way instead of trying to imitate the sounds of renowned rappers like Dok2 or Zico.”

As “Show Me the Money” has grown more popular, many underground rappers, who used to criticize the participants for compromising their integrity for money, began to take part in the program, raising the level of talent on display.

“The skills of participating rappers have gotten so that it has become difficult to survive the audition show without ability that is on par with an actual artist,” said chief producer Choi Seung-jun. “So for this season, instead of producers evaluating participants’ rap skills, it is closer to a collaboration between producers and the participants.”

As popular as it is, “Show Me the Money” has always courted controversy. This season’s adoption of the betting system is likely to draw flack for encouraging gambling among the show’s young audience.

“Rappers often brag about the fortune they have amassed,” said Choi. “Money is used to measure the popularity of the rappers in an entertaining way.”

The first episode of the new season racked up a 1.6 percent viewership rate, lower than the average of previous seasons, according to data from Nielson Korea.