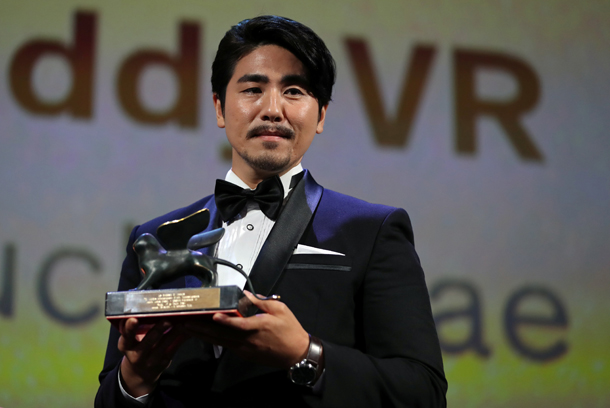 Director Chae Soo-eung, who also goes by Chuck Chae, received the Best Virtual Reality Experience award at the 75th Venice Film Festival for his “Buddy VR.” It was the only Korean film to be invited to the prestigious film event this year, which wrapped its 11-day run on Saturday.

“It’s been quite a journey to Venice, witnessing audiences as they change through the VR experience,” said Chae during his acceptance speech. “This really completes the interactive VR as an art form.”

While thanking the jury members for acknowledging the power of VR narrative, Chae continued, “VR is not only replicating the cinematic language to empower narrative but manipulating time and space. And furthermore, with the process of interactions, we could prove our existence in the reality. VR will empower this magic to the next century as the legacy film has left for us in the last century … It’s a great honor to be part of this progression.”

“Buddy VR” is a 16-minute interactive VR film that takes place in “LibertyLand,” an amusement park featured in the Hollywood movie “Nut Job.” Revolving around a lonely mouse named Buddy that lives in the theme park, the film is about a viewer becoming Buddy’s friend.

“In the end, when you look back at fond moments by doing small meaningless things together, they become precious memories that help build our existence in virtual reality,” the director said about the short movie in an official statement.

Chae worked on the visual effects of a wide range of films, including crime action flick “Fabricated City” (2017), adventure movie “The Pirates” (2014) and Chinese action film “The Taking of Tiger Mountain” (2015).