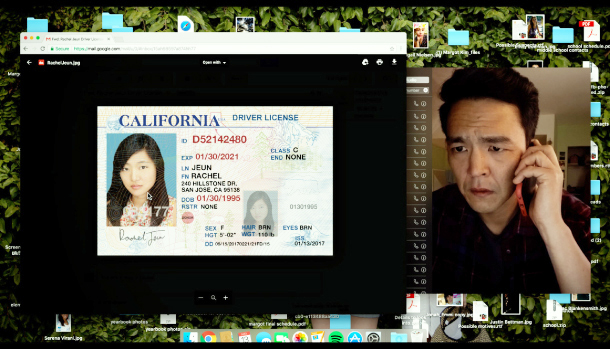 Thriller drama “Searching,” about a father in search of his missing daughter, shot its way to the top of the weekend box office in its second weekend. [SONY PICTURES KOREA]

In its second week, American film “Searching” shot to the top of Korea’s weekend box office, knocking romance flick “On Your Wedding Day” down to number two. The thriller grabbed second place in its debut weekend, but shot to No. 1 thanks to word-of-mouth.

According to data provided by the Korean Film Council on Monday, “Searching,” starring John Cho, sold 768,000 tickets at 1,096 screens from Friday to Sunday, adding its total sales to 1.73 million since the release on Aug. 29.

After the lead detective on the case fails to find a lead for Margot’s whereabouts, David becomes suspicious of the people around him and decides to take things into his own hands.

The film has garnered attention for its unique storytelling and for featuring Asian-Americans in its lead roles. The movie is portrayed through digital interfaces and audiences follow along as the characters interact through computer screens and smartphones.

Coming in at a distant second was “On Your Wedding Day.” In its third weekend, the boy-meets-girl romance flick sold 321,000 admissions at 905 screens, putting its total ticket sales to a whopping 2.5 million, a surprise for a movie that cost 3 billion won ($2.7 million) to make. Its break-even point was 1.5 million tickets. The film has actors Park Bo-young and Kim Young-kwang playing high school sweethearts in an on and off relationship until they reach adulthood.

In third at the box office was sci-fi action movie “Upgrade,” which debuted on Thursday. Over the weekend, the movie sold 89,000 tickets at 220 screens, and its total sales stands at 110,000 admissions as of Monday.

The movie, from horror production company Blumhouse Productions, best known for “Get Out,” takes place in a dystopian future. It revolves around Grey (Logan Marshall-Green), a stay-at-home mechanic who seeks revenge after his wife (Melanie Vallejo) is killed by a self-driving car in an accident that also leaves him a quadriplegic. 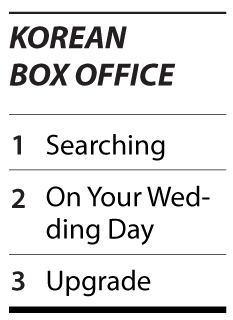 Director Byun Hyuk’s “High Society,” a luxurious drama about a middle-class couple striving to enter the upper class, fell one spot to land in fourth in its second weekend, and the sensation “Along With the Gods: The Last 49 Days” rounded out the top five. Since the fantasy blockbuster’s release on Aug. 1, the movie, starring Ha Jung-woo, Ju Ji-hoon and Kim Hyang-gi, has sold a total of 12.23 million tickets. Though impressive, the sales are a little short of the 14.41 million tickets that the first film in the franchise, “Along With the Gods: The Two Worlds,” sold. Released in December, it is the second best-selling film in Korean history, after the 2014’s period action drama “Roaring Currents” with 17.6 million tickets sold.

The box office has not seen many releases lately, but a new wave of movies will arrive in theaters next week in time for the Chuseok harvest festival, one of the most popular movie-going seasons of the year. Leading the slate of holiday releases will be the creature action flick “Monstrum,” which arrives in theaters tomorrow.