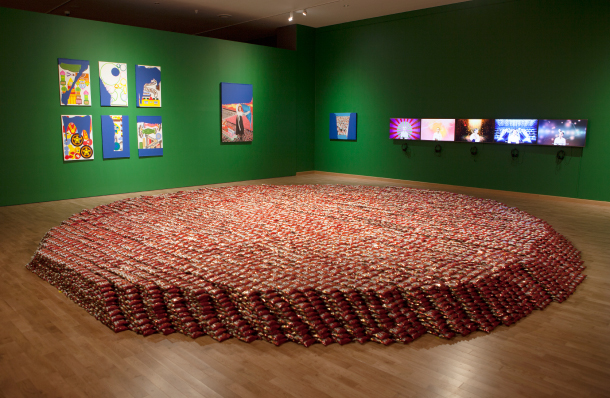 Busan Biennale 2018 is themed “Divided We Stand,” shedding light on the different states of dividedness we live in. Mina Cheon’s “Eat Choco Pie - Together” (2018) is an installation that sits on the basement level of the Museum of Contemporary Art Busan, which allows guests to eat an Orion choco pie and participate in the artwork. [BUSAN BIENNALE ORGANIZING COMMITTEE]

Together we stand, and divided we fall, as the saying goes. But do we really stand together? Doesn’t humanity stand apart, divided by the differences we see in each other? These questions are what captured the minds of Cristina Ricupero and Jorg Heiser, the artistic director and the curator of Busan Biennale 2018, a biennial art event which held its opening ceremony on Friday in the southern port city.

The biennale began its 65-day run on Sept. 8 at two venues - the Museum of Contemporary Art Busan (MoCA) and the former Bank of Korea - under the title “Divided We Stand.” This year’s main location is MoCA, not the Busan Museum of Art where previous biennales had been held, one of the two major differences this year according to Choi Tae-man, the executive director of the Busan Biennale Organizing Committee.

The other change came with the artistic director and curator, who were chosen through an open call that was held last year. The duo met last October in Germany, according to Ricupero, talked about their interest in curating an art exhibition on the theme of division and just a few weeks later, came across the open call for the Busan Biennale. The exhibits focus on either portraying the different divided status of human beings, or the different emotional reactions that people have due to that division.

“The theme of this bienniale is that of divided territories as it is reflected in artists’ work from around the world,” Ricupero said to local press on Friday. “Torn apart are not only nations, or formerly ethnically connected regions - usually by war, colonization, hostile estrangement. But torn apart are also, importantly, psyches.”

“We asked ourselves, what kind of sentiment does the splitting of territories induce in people’s minds in general, and artistic minds specifically? Vice versa, what kinds of mindsets induce the splitting in the first place?” 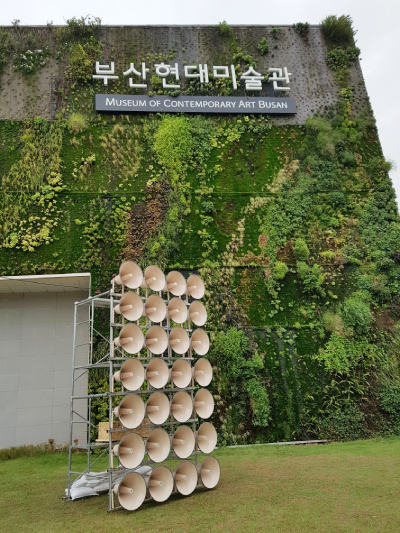 Busan Biennale 2018 is being held at the Museum of Contemporary Art Busan, above, and the former Bank of Korea. The set of speakers is a work by Augustin Maurs, "I HAVE NO WORDS. For propaganda loudspeakers and singing voices" (2018). [YOON SO-YEON]

Shedding light on the different divisions are 125 pieces by 66 teams of artists from 34 countries - a number nearly half that of the biennale in 2016, which featured 121 teams from 23 countries. The reduction reflects the trend in the art world in which art events are shrinking in size. “Internationally renowned exhibitions have actually benefitted from a reduction of the number of artists,” according to Heiser.

“We strongly believe that the time of the mega-exhibition, exhausting even the most professional visitor with ever more venues and artworks, is over,” said the curator.

Staying faithful to the conciseness of the biennale, the works are laid out across three floors of MoCA and the former bank building. The MoCA exhibition begins with a speaker sitting outdoors, resembling the frontline loudspeakers pointed towards North Korea. Walking into the museum, the entrance to the first floor exhibition hall has in front of its doors what resembles an airport check-in line, which forces the visitors to walk an unnecessarily long path. It may look like the museum is overly concerned with managing crowds, but is actually Eva Grubinger’s “Crowd” (2008/2018) that begins an experience of the territorial divides in the world.

Works at the museum include Mina Cheon’s “Eat Choco Pie - Together” (2018), a participatory installation that allows 100,000 visitors to actually eat a package of Orion’s choco pie, Lim Min-ouk’s re-mastered installation from her 2015 solo exhibition titled “The Promise of If” that resembles the television studio of the KBS show “Finding Dispersed Families,” which allows the audience to think about the idea of the division we live in. But not to give an answer, according to Ricupero. 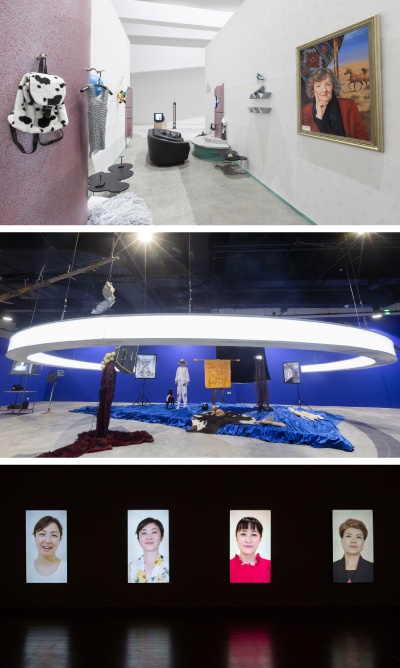 Works by different artists shed light on different divisions, including Henrike Naumann’s “2000” (2018), top, an installation by Lim Min-ouk, center, and “Minyo, There And Here” (2018) by Joo Hwang, above. [BUSAN BIENNALE ORGANIZING COMMITTEE]

“It would be pretentious to expect a reaction from the audience,” said the director. “What we would like to achieve is to raise questions, and make people think about their environment. The idea is to even irritate them and make them think.”

“Our main purpose is to create surprises and raise questions by well-known art works side by side with relatively unknown pieces and new productions, resulting in what we hope is a rich and multi-layered presentation of a wide variety of material,” said Heiser.