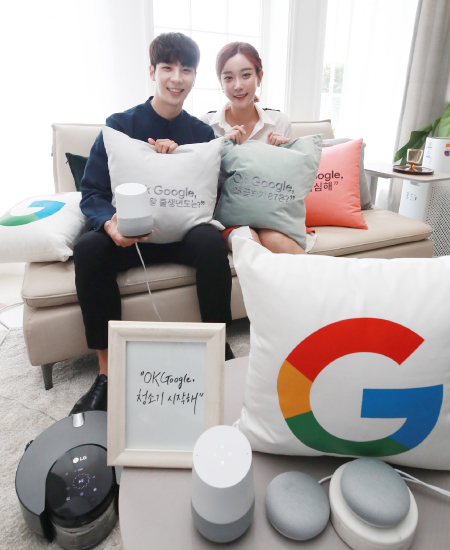 Models pose with Google Home and Google Home Mini at a launch event in central Seoul on Tuesday. [YONHAP]

After two years, the Google Home smart speaker is finally coming to Korea.

The launch also marks the start of Google Home services in Korean, which means that early adapters here who purchased the gadget overseas before can now use Google Home in their first language.

Google Home and the smaller Google Home Mini will go on sale in Korea on Sept. 18 at e-commerce and electronics retailers. The tech giant’s Korean office held an event in central Seoul on Tuesday to demonstrate the Korean-speaking artificial intelligence (AI) speaker to the local press.

The speakers are powered by Google Assistant, which works on AI technology and is activated by verbal commands. Google introduced the Korean version of the service in September, which paved the way for the speaker’s introduction.

“The biggest advantage of Google Assistant is that it is compatible with multiple devices,” said Mickey Kim, Google’s Asia Pacific director for hardware products, during the media event. “The Google Home speaker was devised so that Assistant can be accessible without using your hands.”

On a global scale, Google Home is quickly catching up to market leader Amazon’s Echo, which was released one and a half years before Home. Google’s device was the top-selling smart speaker in the year’s second quarter, according to research firm Canalys.

Google is a latecomer to the domestic market, however. Korean tech companies Naver, Kakao and the country’s top three mobile carriers first released these devices in 2016, and they are constantly releasing new versions with upgraded designs and functions. Samsung Electronics is also preparing to enter the market with its Galaxy Home later this year. 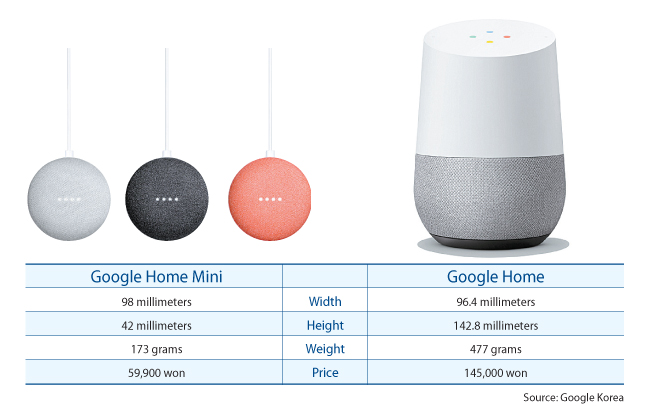 Kim, however, expressed confidence that there is still room for Google Home to gain ground.

“We think the category is still young,” he said.

In terms of voice recognition, Google Home’s advantage is that it can understand two languages at once from seven choices. Users can also set the speaker to learn and respond to specific voices, and the answers can be personalized for different people. For example, Google Home can restart a Netflix video from points that different people stopped watching by recognizing their voice.

The main advantage of Google Home, compared to local smart speakers, is its compatibility with the tech giant’s online services, such as Gmail and YouTube. Music on the speaker can be provided by either local music streaming service Bugs! or YouTube Premium. Google is offering six-month free trials of YouTube Premium along with the speaker.

To enhance the AI speaker’s compatibility as an assistant, Google partnered up with a wide range of local Internet of Things manufacturers, from LG Electronics to smaller companies that make smart lighting or remote controls for window blinds.

It also enhanced the quality of answers that the speaker can offer in Korean by acquiring access to the data of local services. Local restaurant rating app Mango Plate will suggest eateries nearby; e-commerce site Interpark can search for flight schedules and the 1000 Recipe, a mobile app with recipes shared by users, can deliver dinner recipes.