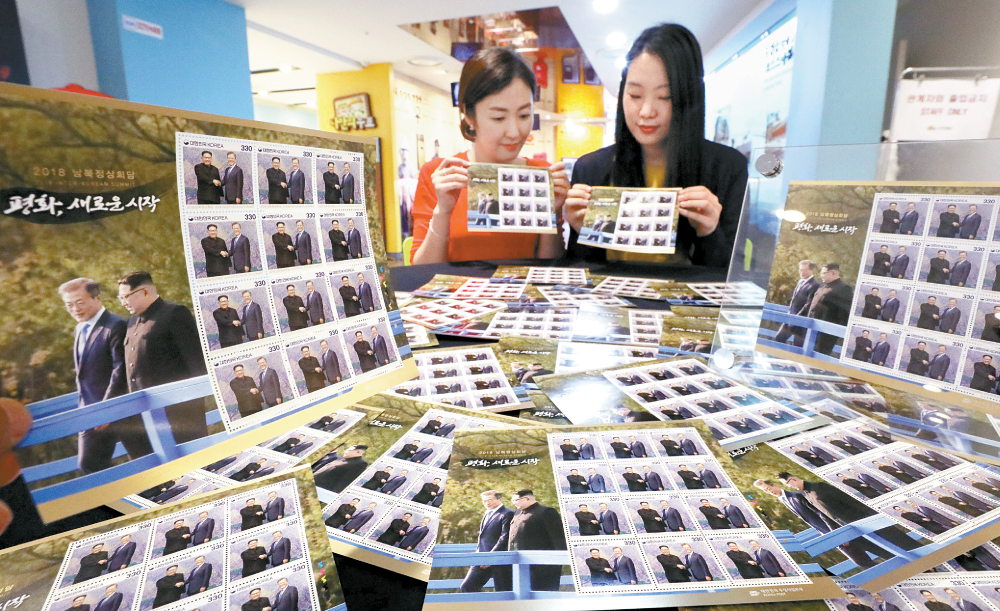 Officials at the Seoul Central Post Office on Tuesday show stamps that commemorate the inter-Korean summit held on April 27 in Panmunjom. The post office will issue four million commemorative stamps and begin selling them today. [NEWS1]

President Moon Jae-in on Tuesday called on the leaders of North Korea and the United States to make “bold decisions” to move denuclearization talks to a higher level, saying the North should rid itself of its nuclear arsenal while the United States rewards it in return.

Moon’s remarks, made at a cabinet meeting in the Blue House, came amid signs of a revival in North Korea-U.S. talks after North Korean leader Kim Jong-un asked for a second summit with U.S. President Donald Trump, which the White House said it was open to.

“In order to bring [denuclearization] to a level that entails ridding the North of nuclear weapons, the leaders of the North and the United States need to make bold decisions and [agree to some kind of bold] framework,” Moon said.

“The North should relinquish its nuclear stockpile and the United States should offer corresponding measures to form the right atmosphere [for denuclearization],” stressed the president, an echo of his previous stance that the two nations should employ a step-by-step process of denuclearization.

In such a process, each denuclearization step made by Pyongyang will be met with reward, such as sanctions relief. Washington has said it wants significant progress in denuclearization before any rewards are given.

Moon said, through such a process, Pyongyang and Washington could work toward alleviating the long-running mistrust between them rooted in a 70-year history of confrontation.

While calling on the Kim Jong-un regime to take additional denuclearization steps, Moon acknowledged Kim had taken “a number of practical” steps already.

Trump critics in Washington charge that the United States is giving in to Pyongyang while getting token gestures of denuclearization and other forms of cooperation.

Kim told Chung his country would never be able to conduct another nuclear test since two-thirds of the underground tunnels at the Punggye-ri nuclear testing site had been demolished.

He said his dismantling of the Sohae missile engine test site, which he said was the only such site, was a proclamation that he would stop long-range ballistic missile tests indefinitely. Despite these steps, Kim told Chung he was disappointed the international community continued to be dubious about his denuclearization pledge.

On an upcoming summit with Kim next week in Pyongyang, Moon said he would focus on easing military tensions along the border and further improving inter-Korean ties.

Only after these conditions were met, he said, could real inter-Korean economic cooperation progress.

During the cabinet meeting, Moon reviewed a bill to legislatively ratify the Panmunjom Declaration, the product of his April 27 summit with Kim. The president earlier requested that the declaration be ratified before the summit so that he could visit Pyongyang with strong momentum and a sense of national unity. Ruling and opposition parties agreed on Monday to look at the bill after the three-day summit, which wraps up on Sept. 20.

Moon expressed frustration over opposition party leaders snubbing his invitation of a day earlier to join him in Pyongyang for the Sept.18-20 summit, urging them to “put aside partisan interests.”

On Monday, the Blue House asked nine major political figures, including the heads of five political parties and National Assembly Speaker Moon Hee-sang, to join Moon on his trip to Pyongyang next Wednesday.

While leaders of the ruling Democratic Party and two liberal opposition parties welcomed the invitation, the major opposition Liberty Korea Party (LKP) and centrist Bareunmirae Party rejected the offer and criticized the presidential office. They said it was only trying to score political points by making them escort the president to the North Korean capital.

The LKP lashed out at the Blue House on Tuesday for announcing the invitation without discussing it and getting its consent first.

“It is politically calculated for the Blue House to make such an invitation public a week before the summit,” said Rep. Yoon Young-seok of the LKP, “without asking for our consent before. I have never seen a government acting so unilaterally.”

“I felt a little annoyed that the president’s chief of staff announced the invitation unilaterally even after I explicitly stated my intention to decline the offer,” he said at a party leadership meeting Tuesday.

The Blue House sent its senior political affairs secretary, Han Byung-do, to the National Assembly Tuesday to get the LKP and Bareunmirae leadership to change their minds. But the LKP leadership did not even meet with Han and instead went to Gumi in North Gyeongsang on a policy trip.

The angry reactions of the two opposition parties illustrate a gulf in how Moon and opposition members in the Assembly view the upcoming inter-Korean summit.