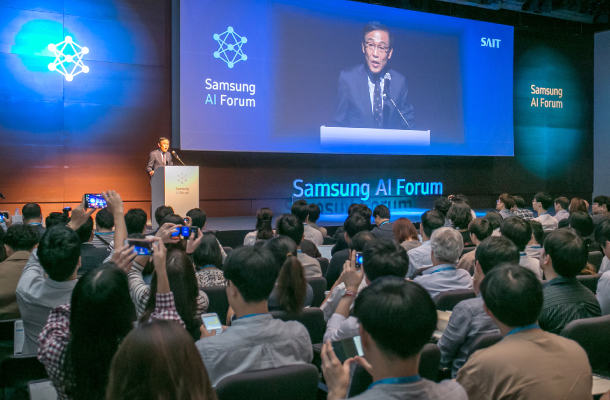 This was the second year the local electronics giant held the two-day event, which ends today.

“I hope [the company’s] efforts to bring innovation in artificial intelligence technology can one day solve human problems and do good for this world,” said Kim Ki-nam, Samsung’s chief executive for its device solution division, which overlooks its semiconductor business. “With world-class AI experts, we hope today’s forum will contribute to confirming the potential of AI technology and in laying a groundwork for future collaborations.”

In attendance were Yann LeCun, a professor of computer engineering and neural science at New York University, and Yoshua Bengio, professor of computer science at Montreal University. Both are influential researchers in deep learning. The first lecturer was by LeCun. His theme was self-supervised learning, which can reduce human work in the machine learning process through an algorithm that arithmetically reads images.

Bengio shared study results of how the AI training method of Stochastic gradient descent (SGD) can affect deep learning in terms of optimization and generalization.

Thursday’s event will take place at Samsung’s Seoul R&D Campus in Seocho District, southern Seoul. Cynthia Breazeal, a professor of media arts and sciences at the Massachusetts Institute of Technology (MIT), will share insights on issues we might face with the development of social robots and how to address them.

Samsung’s researcher Sebastian Seung will describe the results of a study that aimed to better understand the human brain using the artificial neural network. Yiannis Demiris, a professor of human-centered robotics from the Imperial College London, will talk about personal assistive robotics. Maja Pantic, a professor of affective and behavioral computing at the same school and one of the heads at Samsung’s AI Center in Britain, will introduce recent studies in artificial emotional intelligence.

The company said both days’ sessions were attended by more than 1,500 people, including engineers, professors and students.

AI is a big issue for Samsung, which Vice Chairman Lee Jae-yong is keeping a sharp eye on. It was one of four growth engines the company pinpointed in August when it announced a massive 180 trillion won ($159 billion) investment plan. The four business areas alone were to take 25 trillion won in investment.

This year Samsung established six AI research centers, including one that opened last week in New York. The plan is to expand the number of AI engineers by more than 1,000 at its research centers worldwide until 2020.

This week’s forum is Samsung’s drive to create an AI ecosystem in which its smart devices and Internet of Things (IoT) appliances are a part of.

Its AI voice assistant Bixby, released last year, relatively late compared to other global tech companies, is being offered in some of Samsung’s latest home appliances. The goal is to have Bixby in all of its IoT devices by 2020.