A rented place to call your own

A rented place to call your own 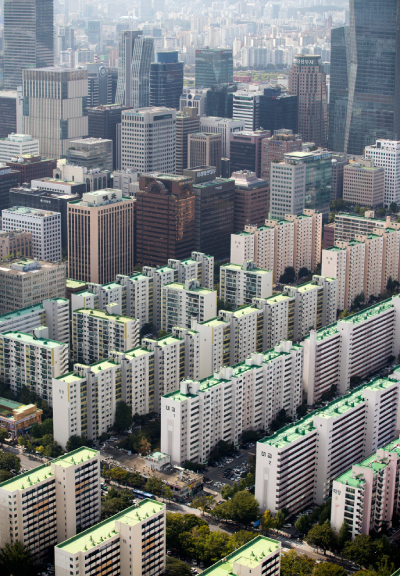 A view of Seoul from the 63 Building in Yeouido, western Seoul, on Thursday. The government announced its toughest regulation that includes prohibiting mortgages to people who own two or more apartments in 43 areas designated as overheated.[YONHAP]

When to sell is more important than when to buy, according to a senior executive of a large Korean company who still lives in a rented home. Given his fat paycheck, he can’t have put off buying a home because he cannot afford one. He may be thinking the sky-high home prices are bound to head down. His reasoning and choice may stem from faith in the Moon Jae-in administration’s housing policy.
The previous government under former President Park Geun-hye encouraged home purchases by making loans cheap and easy to address the imbalance in the housing market from the depreciation of home value and surge in rents. Those who invested have made big money.

The current government advises the opposite. Will people like the executive mentioned above benefit from waiting until home prices plateau? What will be their choice, then? Will they snatch up an apartment at a bargain price or rent without having to worry about moving out or paying more after their term expires? The latter would be a likelier choice. Why would one want to buy a house with a heavier tax and little prospect of appreciation?

The Korean market does behave in a reasonable manner. Under the unique structure of residential properties, jeonse — or long-term rent with lump-sum deposit — hinges on the presumption that home prices will strengthen. Landlords use the lump-sum deposit to make investments on a home with prospects of appreciation. Tenants, in return, can live in a home that they cannot afford to own. If home prices come down, they could converge with rent value. If that happens, tenants will prefer to pay monthly rent instead of longer-term leases that require a deposit tantamount to the actual home value. The phenomenon panned out when housing prices were depressed following the 2008-2009 global financial crisis. When rent became unstable, tenants became potential candidates to buy homes. It is how the instability of home and rent prices repeats in a vicious cycle. This would be of little concern to the top 1-percent like the large corporate executive.
But for most working and middle class people, home insecurity plagues them for life. In Seoul, 57 percent of residents live in rented homes, while nationwide, the ratio hovers at 42 percent. When the rental market turns jittery, the angst stings the working class, young people and homeless people.

The government’s ongoing housing policy aims to find homes for “constructive” buyers. It has gone all-out to clamp out speculative forces and the real-estate rich that disrupt the market. Its plan to expand public rent offerings to hold down rent prices has flip-flopped amid fears that they can be targeted by speculators. Although its worries are not groundless, its policy appears to be too impulsive.

House security does not have to mean ownership. In Britain and Ireland, where home ownership reaches 70 to 80 percent, home prices that skyrocketed since the 1980s crashed heavily in the aftermath of the 2008 financial crisis. House prices are most stable in Germany where nearly half of the population lives in rented homes and just 40 percent in their own homes. The desire to own a home can fuel prices, whereas a stable rent environment can contribute to capping home prices.

For the latest package that includes tougher taxes on multiple homeowners to reap the desired effect, the government must also roll out with measures on renting. If tax hikes end up hurting tenants, the policy will miss its goal. The supplies must be sufficient in popular neighborhoods and public rent for the middle and working class likewise. Authorities also should seriously contemplate on stronger protection for tenants by giving them legitimate right to renew contracts and enforcing caps on rent rises. The ultimate goal should be home security, but that could be overlooked if authorities are entirely preoccupied with the campaign to press down housing prices. To be true to the government slogan of making a residence a place to live, not own, rent must become stable.