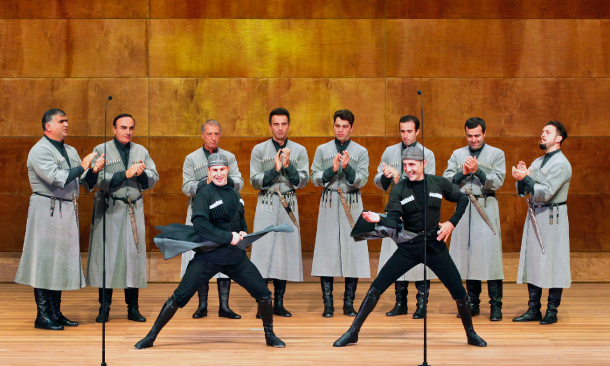 The Rustavi, the state academic ensemble of Georgian folk song and dance, performs at the Seocho Culture and Arts Center in southern Seoul on Sept. 7. [PARK SANG-MOON]

It is not uncommon to hear foreigners singing along to the words of some K-pop songs today, but it’s more of a rarity to hear the words of traditional Korean songs sung in a Georgian style that has been around for more than a thousand years.

“We sung two songs in Korean tonight - the ‘Buyongsan’ and the ‘Arirang,’” said Anzor Erkomaishvili, artistic director of Rustavi, the state academic ensemble of Georgian folk song and dance. “We usually prepare the songs traditionally sung in that country, in their language, whenever we go on tours abroad.”

The performance at the Seocho Culture and Arts Center in southern Seoul on Sept. 7 marked the end of a two-week tour of Korea.

Georgian polyphonic singing has been registered as a Unesco Intangible Cultural Heritage of Humanity since 2003. Some songs date back to the eighth century, according to Unesco.

“In celebrating 100 years of the Democratic Republic of Georgia, we thought it may be a good idea to have the Georgian group visit Korea,” said Georgian Ambassador to Korea Otar Berdzenishvili. “So Professor Lim Jae-chul, who helped organize their visit, and I got to talking about it a year ago and here we are today. We are glad to have hosted the concert throughout Korea, in addition to in Seoul.”

Lim was a vocal music professor at Chosun University in Gwangju and the arts director of the Buam Art Hall.

In commemorating the country’s 100th anniversary, the embassy also plans to host a celebration next month for the commencement of a Georgian language course at Hankuk University of Foreign Studies and a film festival near the end of the year.