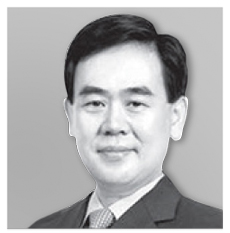 Kim Hyung-tae
The author, a former president of the Korea Capital Market Institute, is a guest professor at Seoul National University.

The campaign is to stretch and invade the territory until it is fully occupied. The attack must take place simultaneously by land, sea and sky. The march continues until a colony of various different markets and culture is established. This does not just explain an imperial state, but the business model of e-commerce behemoth Amazon.

An empire with absolute power can demand sacrifices from the conquered such as heavy taxes to fund its expansion. This is how the Romans were able to build sophisticated roads, waterways, fortresses and architecture that have lasted more than 2,000 years. Its citizens did not complain. They believed the rewards from the costly conquests paid off.

The empire of Amazon is equally proud. It went public on the Nasdaq in 1997, three years after its founding as an online bookstore. It has never rewarded its shareholders in cash dividends. It re-finances its earnings for more expansion and conquests. Founder Jeff Bezos does not care for short-term profits. Yet the market has complete faith in him.

The company began to make profit in 2003. It reported losses in 2012 and 2014. But its stock has been fixed in one direction: up. It defies the laws of gravity. It became the second stock after Apple to reach a market cap of $1 trillion. The stock trades over 150 times its earnings, compared with an average ratio of 50 for Google, 20 for Apple, and eight for Samsung Electronics.

Amazon remains the envy for all entrepreneurs because of its steadfast and far-sighted management under Bezos and patient and loyal investors who do not complain even with zero cash dividends or business flops. Few stocks earn such loyalty. Amazon earned its credibility because it never stops awing the market. Bezos is referred to as the “best storyteller” on Wall Street. Amazon has a single cohesive goal of creating a digital world where any service, product or experience can be traded after paying the company a certain fee.
Citizens of the Roman Empire or Genghis Khan’s Mongol Empire had firm belief in their expansion. Even in the 25th year, investors have not been disappointed by Amazon. The company does not try to impress and buy favor from investors through its bottom line. It just rolls out a new episode that can keep investors enthralled. After it announced it was entering the business of deliveries, logistics stocks tumbled. Amazon, like any imperialistic state, can be destructive.

Strengthening rewards for shareholders through greater dividends and stock buybacks has been in fashion for Korea Inc. It is becoming a norm for any publicly trading entity. Korean companies in the past were notorious for neglecting programs to raise shareholding value. But it is not desirable to demand all companies resort to high dividend returns and stock buybacks. It can be worrisome if those actions attract speculative hedge funds chasing short-term stock profits.

So how does an investor judge the reasonability of the stock reward program? That judgment should hinge on the company’s investment plan. When there are many investment opportunities, it is better for shareholders as well as the company to spend more on new projects. Shareholders would happily settle for less cash in payouts if they can benefit more from a price gain due to the company’s future prospects. Extra money should be spent on shareholders when there are no good ventures to invest in.

The more complex technology and business becomes, the more difficult it becomes to judge a good investment. It is also hard for a company to persuade investors that an investment is worthy. This is why the story-telling ability of a CEO is important. Bezos has turned his business vision into an epic drama. This is how its stock continues heading north even if the company refuses to pay any dividends.

Investors feel rewarded in the fact that they are on a grand mission to create the Amazon Empire. They dream of the day when futuristic scenes of airborne warehouses or drones making deliveries to doorsteps becomes a reality. They are thrilled by the idea portrayed in an ad of a shopper walking out with groceries in hand without having had to go through a checkout line. Visionaries excite the imagination and that is a powerful form of persuasion. Who would not want to bet on a company with an ingenious plan of putting a fulfillment center in the sky to run its fleet of automated delivery drones?

Korean institutional players are being pressed to adopt the stewardship code and exercise greater shareholders’ voices in management decisions. They might be tempted to demand greater dividends from the companies they invest in. To make the practice work, institutional investors should be able to judge whether it is better to demand greater dividend returns or agree to a management’s investment plan. The CEO also must be able to convince investors how its investment plan can help the company and shareholders in the long run. The ability to structure a good story for a business vision and deliver it in a convincing tone to an audience is demanded from today’s CEOs.