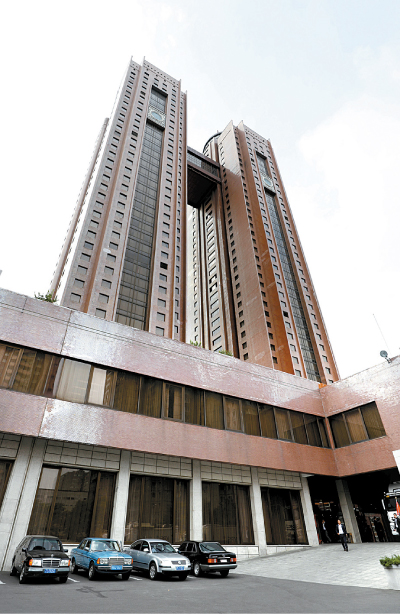 A view of Pyongyang’s Koryo Hotel on Sunday, where key business delegation members will stay. [YONHAP]

Leaders of Korea’s top four conglomerates are flying to Pyongyang with President Moon Jae-in today, prompting many to wonder if any inter-Korean economic cooperation is possible considering all the sanctions on North Korea.

Seoul had initially planned to invite only the heads of business lobbying groups and public companies but Pyongyang requested chaebol chiefs come to meetings with high-ranking North Korean officials, according to sources within the government.

The top four conglomerates - Samsung, Hyundai Motor, SK and LG - are sending executives on the trip, but they would have to do some very clever juggling between North Korea and Washington to find a way to do any kind of new business.

“It’s very tricky to predict what North Korea will ask from [the Korean chaebol] and how businesses will react as there are so many geopolitical and diplomatic issues entangled,” said a researcher at the Korea Development Institute. “Business leaders are likely to take the Pyongyang trip as a chance to understand the North Korean situation and think about what future cooperation will be plausible.”

In Samsung’s case, this will be the first time any member of the Lee family visits the North. For the first two inter-Korean summits in the North Korean capital - in 2000 and 2007 - then-Vice Chairman Yun Jong-yong went instead of Chairman Lee Kun-hee.

The Blue House’s invitation to Lee Jae-yong was unexpected because of his involvement in the bribery and abuse of power that led to the downfall of former president Park Geun-hye. Although he was freed from prison in February after an appeals court halved his bribery sentence to two and a half years and suspended it, his case is still being appealed.

Im Jong-seok, the chief presidential secretary, told reporters at a briefing on Sunday, “The criminal trial of vice chairman will proceed strictly as scheduled. But business is business.”

“We have nothing to mention,” said a Samsung spokesman. “It’s led by the Blue House and we are one of the companies invited.”

From 2009, Samsung Electronics allowed Taedonggang TV factory, a North Korean manufacturer on the outskirts of Pyongyang, to assemble TVs as well as smaller home appliances such as mobile phones and audio cassettes from Samsung-made components. Annual production of color TVs was a marginal 20,000 to 30,000 units and they were sold in the South. That cooperation halted in 2010 after the freeze in inter-Korean relations under the Lee Myung-bak administration and after the sinking of the warship Cheonan.

“Selecting North Korea as a production destination requires a flurry of considerations to make,” said Lee Seok-ki, a researcher at the state-run Korea Institute for Industrial Economics and Trade.

“But if we only look at the cost side, North Korea has more labor cost effectiveness than any other country on the planet - even Vietnam and China.”

He added that the competitiveness of the North Korean labor force has much improved since before 2010.

Hyundai Motor Group heir apparent and Executive Vice Chairman Chung Eui-sun, meanwhile, departed for the U.S. Sunday evening for meetings with Commerce Secretary Wilbur Ross and other business and political leaders to discuss ways to avoid tariffs on cars imported to the U.S. If a 25 percent tariff is imposed on all cars imported to the U.S., Hyundai Motor and Kia Motors may face up to 3.5 trillion won ($3.1 billion) worth of new tariffs. The Blue House explained Chung’s business trip to the U.S. had been arranged much earlier.

“One of the most imminent challenges for Chung at the moment is to find ways to avoid the huge tariff in the U.S. and coming up with a new plan for the group’s corporate restructuring,” said one industry insider who asked not to be named.

In place of Chung, Vice Chairman Kim Yong-hwan will join the delegation.

Hyundai has the deepest relationship with North Korea among chaebol.

Chung Ju-yung, the late Hyundai founder and grandfather of Chung Eui-sun, made high profile visits to North Korea twice in 1998.

In June and October of that year, he had 5-ton trucks carry 10 cows each to donate to Pyongyang. Over 1,000 cows were sent in two rounds. The event was a cornerstone for reconciliation, and led to a rapid thawing of inter-Korean relations. It spurred the launch of tours to Mount Kumgang and the starting of the Kaesong Industrial Complex.

SK Chairman Chey Tae-won is the only one of the four top business leaders to be visiting North Korea for a second time. His first trip was 11 years ago. SK might consider cooperation in energy, construction, telecommunications and semiconductors.

LG Chairman Koo Kwang-mo, who was elevated to his post in June, is following in the footsteps of his late father Koo Bon-moo. Like Samsung, LG Electronics has a history of using a North Korean manufacturer to assemble its TVs between 1996 and 2009. LG might be interested in using North Korean labor or building IT infrastructure in the North as well as exploiting mineral resources.

Aside from the top four business groups, Posco and Hyundai Group have shown a more proactive stance over potential business cooperation with North Korea.

The former has already launched a task force on inter-Korean business cooperation centered around building infrastructure, reconstructing steel mills and exploiting natural resources in the North.

Hyundai Group Chairwoman Hyun Jeong-eun has been outspoken about resuming Mount Kumgang tours by the end of this year. The group also set up a task force on inter-Korean business in May.