Monster flick can’t scare ‘Searching’: ‘Monstrum,’ with its cast of stars, failed to top the box office in its debut weekend

Monster flick can’t scare ‘Searching’: ‘Monstrum,’ with its cast of stars, failed to top the box office in its debut weekend 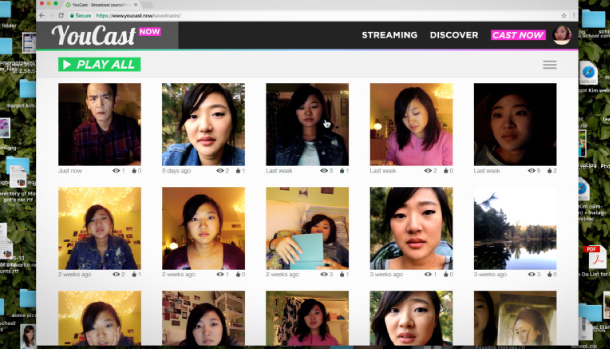 Period creature flick “Monstrum” failed to outperform last weekend’s box office-topping thriller “Searching.” With a cast that includes Kim Myung-min and Hyeri from girl group Girls’ Day, “Monstrum” debuted at the top of the box office on Wednesday, but the weekend belonged to the American thriller.

“Searching,” which shot to the top of the weekend box office in its second weekend, remained at the top of the chart in its third weekend. From Friday to Sunday, the movie sold 505,000 tickets at 955 screens, totaling 4.6 billion won ($4.13 million). Since its release on Aug. 29, the film has sold a total of 2.5 million admissions.

Starring Korean-American actor John Cho, “Searching” follows a single father named David (Cho) desperately attempting to find his missing teenage daughter Margot (Michelle La). After the lead detective on the case fails to find Margot’s whereabouts, David becomes suspicious of everyone around him and decides to take things into his own hands.

Other than its cast of Asian-Americans in lead roles, the movie has gained attention for portraying the entire story through digital interfaces, allowing audiences to follow along as the characters interact via computer screens and smartphones.

Action fantasy flick “Monstrum” came in at second over the weekend. Despite being shown at more screens than “Searching,” its total ticket sales fell short, with 151,000 tickets sold. Since landing in theaters on Wednesday, the movie has sold a total of 613,000 admissions.

Based on a brief record in the Annals of the Joseon Dynasty (1392-1910) that a strange monster haunted the royal palace in 1527 during the reign of King Jungjong (1488-1544), “Monstrum” is the first Korean creature feature set in the Joseon era.

Directed by Heo Jong-ho, who was also behind 2015’s “The Advocate: A Missing Body,” the movie tells the story of four brave people who fight a gigantic and mysterious creature that brutally and indiscriminately devours people. The four people are the king’s loyal subject Yoon Gyeom (Kim Myung-min), his right-hand man Seong-han (Kim In-kwon), Yoon Gyeom’s fearless daughter Myeong (Hyeri) and a military officer (Choi Woo-sik).

Together, they fight both the monster endangering the monarch as well as a faction that takes advantage of the situation to launch an attempt to dethrone the king.

Romance flick “On Your Wedding Day” fell a spot to land at third, with 144,000 tickets sold over the weekend, while newly-released sci-fi flick “The Predator” arrived at fourth in its debut weekend in Korea.

Starring Park Bo-young and Kim Young-kwang as the film’s leads, the total ticket sales for “On Your Wedding Day” currently stands at 2.8 million, a surprise for a film in the romance genre, which has become less popular among local audiences over the past few years.

“The Predator,” the fourth installment of the “Predator” film series, attracted 98,000 people to cinemas over the three days. 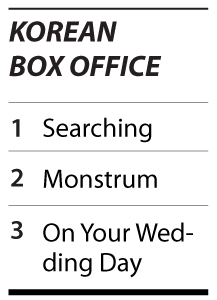 The latest film in the franchise begins with a young boy from the suburbs who accidentally triggers an alert that calls a group of violent aliens back to Earth from the dark side of the galaxy.

Starting next week, a number of big-budget flicks are hitting theaters in time for the Chuseok holiday, including period epic “Fengshui,” battle drama “The Great Battle” and crime flick “The Negotiation.”