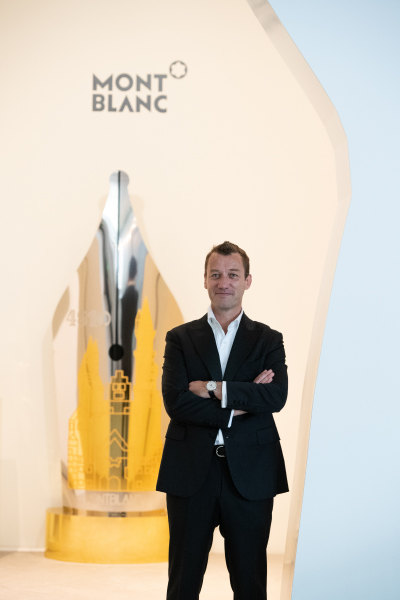 Eric Edder, Montblanc Korea’s managing director, says it is natural for Montblanc, coming from the handwriting world, to support the arts through its diverse mecenat programs. [MONTBLANC KOREA]

Corporate social responsibility has become the norm for companies all across the globe. Businesses are assessing ways to be more socially responsible, such as investing in ways to be more environmentally friendly, launching programs to benefit society and more. Some companies make contributions specifically to the arts and culture, organizing various art patronage projects known in French as mecenat. Montblanc, the Hamburg, Germany-based manufacturer behind luxury writing instruments, honors people who devote their time, money and heart to fostering arts and culture.

Montblanc’s major mecenat program is its annual de la Culture Arts Patronage Award (MDLC). Established in 1992 by the brand’s Cultural Foundation, the award selects individuals or representatives from business as “true arts patrons” and presents them with 15,000 euros ($17,500) and the limited edition Patron of Art Edition pen.

This year, 17 patrons have been selected and Choi Yoon-jung, chairman of the Paradise Group’s Culture Foundation, is one of them. The group recently opened Paradise City, the country’s first casino and hotel complex near the Incheon International Airport and the cultural foundation established an Art Space, in an effort to support local artists while allowing more people to enjoy the arts and culture. The Art Space officially opens today.

“The Art Space is the core of Paradise City,” said Choi when she received the award on Tuesday at Paradise City in Incheon. “There are numerous hotels that hang up and install artworks but I couldn’t stop thinking that they were merely there to be a part of the interior design. With that in mind, we have designed the new Art Space with a philosophy and story.”

The Art Space, according to Choi, is a plaza-like space inside Paradise City, inspired by the Piazza della Signoria, a plaza in Florence, Italy. In one corner of the plaza, there’s a two-story exhibition hall where visitors can enjoy exhibitions. In the second floor’s Corridor Gallery, Montblanc has organized the “Montblanc Patron of the Arts Exhibition.”

“There are no entrances or exits in a plaza,” Choi said, adding that she hopes the art exhibitions that will be held in this plaza go beyond merely displaying objects for the hotel but become a platform where artists can showcase their works and a space that anyone can visit.

“We hope the Art Space truly demolishes the walls of art exhibitions and make art fun and enjoyable for anyone,” Choi added. Choi decided to donate her prize money to the Gwangju Biennale Organizing Committee.

Sam Bardaouil and Till Fellrath, co-chairmen of the Montblanc Cultural Foundation, who attended the Tuesday event, said they believe Montblanc, as a brand that has its roots in the culture of writing, will continue to show its appreciation of the arts and culture because it “truly enriches the people’s lives.”

To hear more about Montblanc’s mecenat projects, the Korea JoongAng Daily recently sat down with Eric Eder, Montblanc Korea’s managing director. The following are edited excerpts from the interview. 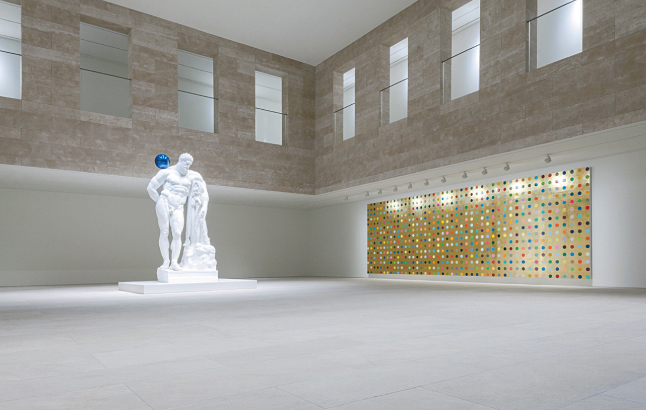 Q. What is the criteria and process for selecting the winner of the Montblanc de la Culture Arts Patronage Award in Korea?

A. The candidate selection is made according to the personal commitment of the candidates to support art and artists and on how this personal support will allow a wider audience to benefit from it. Both the host country and a group of the most knowledgeable individuals are in charge of selecting the candidates. The final winner of each country is chosen by five members of the Montblanc Cultural Foundation’s Curatorium and the Foundation’s co-Chairmen Till Fellrath and Sam Bardaouil.

What was the main reason for choosing Choi Yoon-jung from the Paradise Culture Foundation?

We believe that she perfectly embodied the Patron of Art role. She perfectly corresponds to the definition of the patron of Art. When looking at her role when it comes to supporting the arts, since 1997, the Paradise Culture Foundation that she runs has supported more than 165 culture and arts projects through exhibitions, performance, art shows, while also creating the New York Art Omi residency project, allowing hundreds of artists to take time to fully realize their talents or simply take a break from their creative activities. As you know, last year, Paradise City unveiled its art collection to the public, allowing more people to access major artworks. The role is again highlighted by the creation of the Art Space in Incheon where the public will have access to more than 3,000 art pieces.

Other than the awards, how else does Montblanc support culture and the arts in Korea?

This year, we had the opportunity to collaborate with the famous D Museum during its recent exhibition titled “Weather.” We organized a talk show, writing events, calligraphy class and there was even a pop-up installation, which wasn’t a commercial one, so that visitors could experience the culture of writing. We have also collaborated with Munhakdongne Publishing Group for editing a particular “Le Petit Prince” novel.

What is the reason behind Montblanc’s participation in mecenat activities?

Mecenat is part of the social responsibility of a company. For Montblanc, it is pretty natural coming from the handwriting world. There’s a natural link between Montblanc and the culture. Last year’s winner of the MDLC was Mr. Lee Ho-jae, who said that “art started through writing.” Montblanc has always seen culture as the backbone of the civilization and that is also why we created the MDLC in 1992. On top of that, Montblanc has also been collecting commissioned artworks since 2002. The ultimate goal of this collection is to remember the importance of art and culture for our civilization. Without art and culture, there is no possibility to leave a mark and we will lose our memory.

Can you please explain the limited edition Patron of Art pen that is specifically made for the winners?

It is a writing instrument which pays tribute to a great patron of art, Ludwig II King of Bavaria, who was also known as the Swan King or the Fairy Tale King. His real interests were in art with the building of the New Swan-Stone castle, music and architecture. One of the first acts of his reign, a few months after his accession, was to summon Wagner to his court. This special pen is totally inspired by the life and work of Ludwig II with, for example, the skeleton design of the writing instrument featuring mural paintings of the lavish throne room, or the nib reproducing the Neuschwanstein Castle. Each winner will have their initials engraved on the pen.

I heard that you also have deep affection for the arts. Since you are in Korea, what are some aspects of Korean culture that have appealed to you?

My tastes are pretty eclectic considering the richness of the art and culture scene in Korea. My wife, who is Korean, also was involved in the local art industry, therefore I am very interested in Korean artists when it comes to contemporary art. I am totally a fan of artists like Kim Tschang-yeul and his water drop paintings, Lee Ufan and Kim Whanki for their minimalism, Park Seobo for his work on lines. For the literature, I really enjoy Korean writers like Kim Young-ha and Hwang Sok-yong and as for the movies, I love filmmakers like Park Chan-wook, Im Sang-soo and Na Hong-jin.

The culture of writing can be seen as quite old-fashioned but Montblanc seems to be very innovative, and good at combining tradition and innovation. Is there anything that you’ve tried for the first time this year?

We are constantly innovating so this year, like previous years, there are a lot of firsts in every category. For the first time ever, we’ve chosen a local friend of Montblanc, actor Park Seo-jun. You will also soon see the fruit of our collaboration through the launch of a Capsule Collection to which Park contributed. We have also explored different leather techniques [for our watches and accessories] to provide multiple customization options for our consumers - from hand painted marquage to foil calligraphy, from tattoo to hot stamping.

What do you think is the strength of Montblanc compared to other luxury brands?

Taking the utmost quality of the products for granted, I will say the capacity to be the Maison of luxury business lifestyle and the capacity to be the leader in luxury accessories for men. Montblanc is about luxury with purpose. By designing and crafting stories, products and experience, we inspire people to leave their mark. Our prices also make us capable to reach customers from soft luxury items up to the high end. We also have the capacity to constantly innovate, capitalizing on our heritage and startup mindset. As an example, the Augmented Paper created a bridge between the analog and digital world or the Summit Smart Watch, which takes back all the codes of the fine watchmaking with the latest technology.