Cheers heard in Seoul as Moon steps off plane

Cheers heard in Seoul as Moon steps off plane 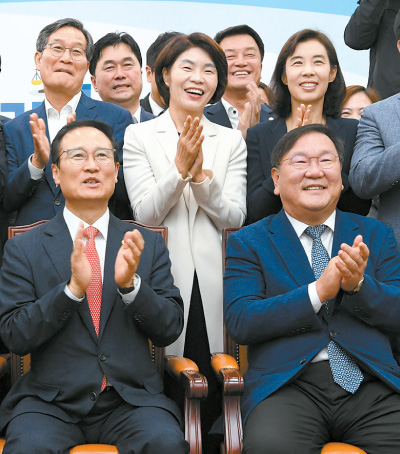 Leaders of the Democratic Party applaud as they watch President Moon Jae-in’s arrival in Pyongyang on Tuesday. [YONHAP]

The public response to the start of the third Moon-Kim summit was generally upbeat on Tuesday, although the atmosphere was far more subdued in the National Assembly as conservative lawmakers remained pessimistic that the meeting would bring about any tangible results.

Crowds gathered around the TVs in Seoul Station, central Seoul, to watch the live broadcast of South Korean President Moon Jae-in stepping off the plane to be greeted by North Korean leader Kim Jong-un on the tarmac at Pyongyang Sunan International Airport. The two leaders’ embrace was met with applause, with some members of the public capturing the moment with their smartphones.

The crowd in Seoul Station seemed optimistic. Members of the public told reporters that they hope such meetings can take place more regularly now, with some adding that they hope that further inter-Korean cooperation will lead to more jobs and economic opportunities.

A few, however, remained guarded. One man said he doubted that meaningful results can be produced in the face of international pressure against North Korea, adding that the summit would only have superficial significance.

In Abai village in Sokcho, Gangwon, where refugees from the North settled after the 1950-53 Korean War, the eyes of the older residents betrayed a shimmer of hope as they watched the historic meeting on television.

“The mountains and streams where I played as a child are still clear as day in my mind,” said Kim Jin-guk, 79, whose hometown is in North Korea’s North Hamgyong Province. “I hope South-North relations improve in the future so I can set foot in my hometown one last time.”

Within the political establishment, reactions to the summit were split down party lines.

The ruling Democratic Party (DP) and the smaller liberal opposition parties, whose leaders accompanied Moon to Pyongyang, were optimistic.

Lawmakers of the DP celebrated as they watched the summit broadcast ahead of a party meeting at the National Assembly on Tuesday. Cheers and claps filled the room, while at least one lawmaker was moved to tears.

“A truly memorable moment,” said floor leader Hong Young-pyo. “More than anything, the summit must make progress on denuclearization and defusing military tension between the South and North.”

Before departing for Pyongyang, Chung Dong-young, leader of the Party for Peace and Democracy and a former Unification Minister, said holding the summit was an achievement in itself. The best scenario would be one in which Kim Jong-un pledges complete denuclearization in his own words, he said. But even if Moon were just to relay Kim’s message to the U.S., he added, this could re-bridge the stalling talks between Washington and Pyongyang.

Reactions from the conservative opposition were less positive.

Kim Sung-tae, floor leader of the main opposition Liberty Korea Party, said at a party meeting on Tuesday he welcomed the fact that the summit would address denuclearization, but added that the meeting must move beyond just a facade to produce actual results.

Kim also took the opportunity to criticize the president’s handling of the economy, panning Moon for taking 17 business leaders - including the heads of Korea’s top four conglomerates - with him on a “not so special” trip to the North at such a time.

“Denuclearization of the Korean Peninsula is the first knot [of the summit],” said its floor leader Kim Kwan-young. “If the knot is untied, then an end-of-war declaration and inter-Korean economic cooperation … may be possible. But if not, then this event will be nothing more than a 200-member cruise to Pyongyang.”