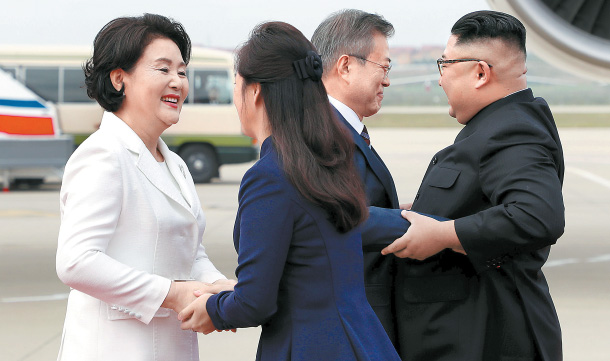 The wives of the two Korean leaders met Tuesday on the sidelines of the third inter-Korean summit in Pyongyang and visited a children’s hospital and a music college together.

Former South Korean presidents Kim Dae-jung and Roh Moo-hyun were accompanied by their wives when they visited North Korea in 2000 and 2007, respectively, but the wife of then-North Korean leader Kim Jong-il did not show up to any official events.

Ri and Kim Jung-sook first met face-to-face on April 27 during this year’s first inter-Korean summit on the southern side of the Panmunjom truce village. Ri crossed the border in a black sedan to attend a dinner banquet hosted by the South.

The visits to the two institutes were made Tuesday afternoon as South Korean President Moon Jae-in and North Korean leader Kim Jong-un were holding the first of a two-part summit this week, the third between the two leaders.

At the hospital, Ri and Kim Jung-sook talked with four young patients and their guardians, after which they dropped by a treatment room for children with neurodevelopmental disorders and a classroom in which long-term patients learn through play and receive psychological education.

At the music university, they were shown four performances by the school’s orchestra and choir, including “We Are One,” a famous North Korean song yearning for reunification, which both Ri and Kim Jung-sook sang along to.

Renowned South Korean composer Kim Hyeong-seok, a member of Moon’s entourage who accompanied the first lady to the music university, was quoted by Ko Min-jung, deputy spokesperson for the Blue House, as saying he hoped to co-produce a song that can be sung by musicians from both Koreas next year to mark the centennial of the March 1 Independence Movement. The mass anti-Japanese demonstration held in downtown Seoul on March 1, 1919, was a catalyst for the independence movements that sprung up across the then-unified Korea.

Japan’s colonial rule over the peninsula began in 1910 and lasted until the conclusion of World War II in 1945.

Local pundits speculated Ri would accompany Kim Jung-sook during her visits to North Korean facilities this week, given the North Korean leader’s fondness for the international spotlight and his efforts to make himself appear to be a normal head of state.

North Korean media, which used to refer to Ri as Kim Jong-un’s “wife” or give her no title at all, began to address her as the “first lady” on Feb. 8, when she observed a military parade celebrating the 70th anniversary of the founding of the North Korean Army alongside Kim Jong-un.