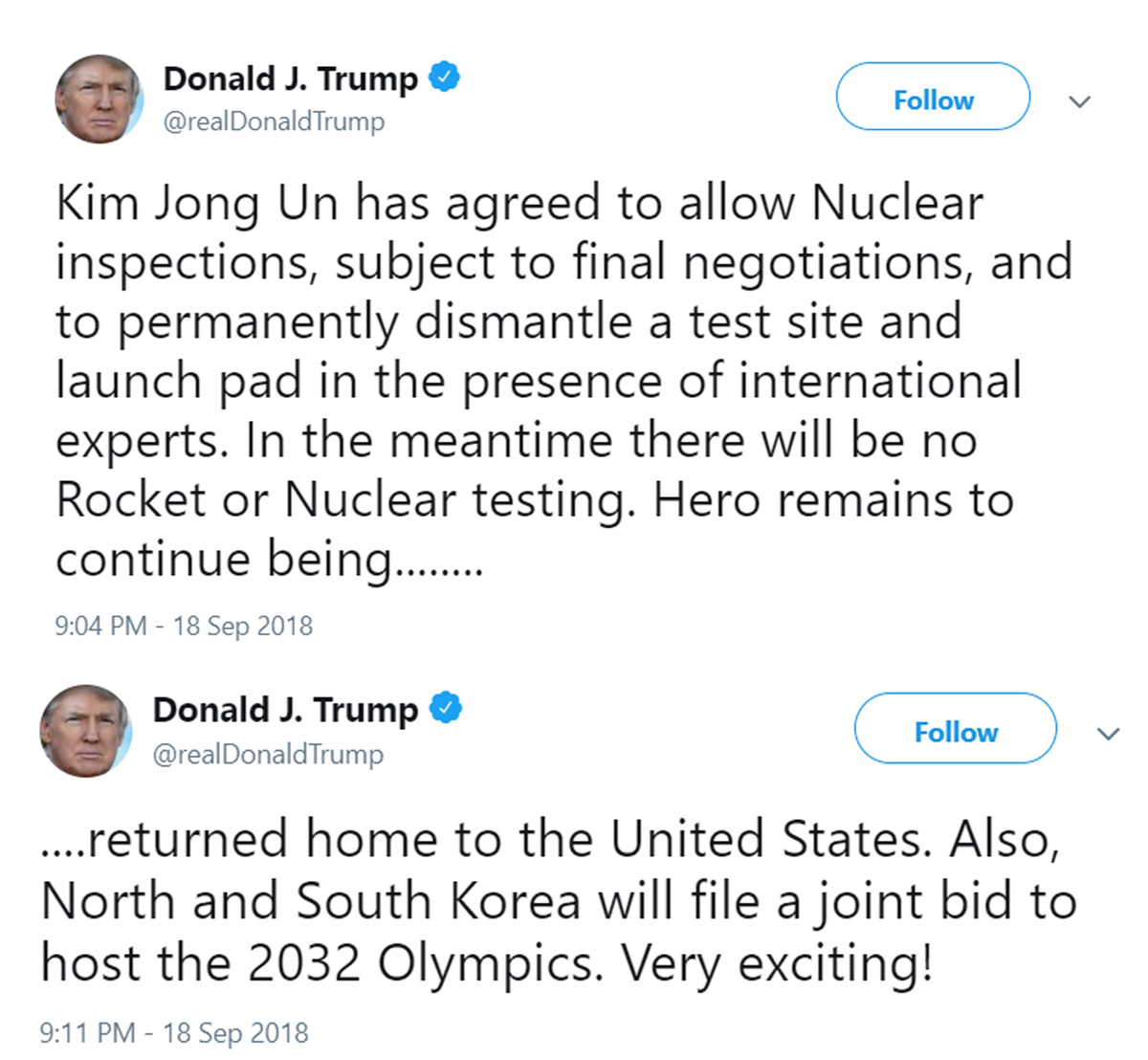 Trump tweeted, a little over an hour after the announcement, that Kim “has agreed to allow Nuclear inspections, subject to final negotiations, and to permanently dismantle a test site and launch pad in the presence of international experts.”

Much hinged on the substantive outcome of South Korean President Moon Jae-in’s third summit with Kim in Pyongyang, as it is expected to help advance the impasse in the North-U.S. denuclearization dialogue.

Trump’s response, which came around midnight in Washington, indicated that the U.S. president had been closely monitoring the inter-Korean summit. The president also tweeted that in the meantime, there will be no rocket or nuclear testing, and that bodies of fallen U.S. soldiers will continue to be returned to the United States.

In their joint declaration signed Wednesday, Moon and Kim agreed to the dismantlement of the North’s Tongchang-ri missile engine test site and launch pad, in the presence of outside experts. The North is willing to permanently shut down its Yongbyon nuclear complex if the United States takes unspecified “reciprocal action” and cooperate toward the “complete denuclearization of the Korean Peninsula.”

The North is asking that Washington also takes some measure toward guaranteeing the security of its regime, a point that was also included in the June 12 Kim-Trump statement.

The two Korean leaders said they will seek to jointly host the 2032 Summer Olympics, which Trump endorsed through a second tweet.

In a follow-up tweet, Trump wrote: “Also, North and South Korea will file a joint bid to host the 2032 Olympics. Very exciting!”

Moon and Trump agreed to a temporary suspension in joint South Korea-U.S. military exercises at the beginning of the year, ensuring the success of the PyeongChang Winter Olympics. The North took part in the Winter Games and the two Koreas fielded a unified team. This led to a continued de-escalation of military tensions and the subsequent inter-Korean and North-U.S. summits.

But Washington has been waiting for a meaningful step toward denuclearization from Pyongyang following the June 12 Kim-Trump summit in Singapore, even canceling U.S. Secretary of State Mike Pompeo’s trip to Pyongyang at the last minute last month because of a lack of progress.

The latest summit produced a pledge from Kim to abide by the verification process in allowing foreign experts to enter the country.

Ahead of the summit, Trump asked Moon to play the role of “chief negotiator” with the North.

Moon and Trump will hold a summit next Monday in New York on the sidelines of the UN General Assembly, announced the Blue House Thursday, to discuss in detail the results of the inter-Korean summit. This meeting will be an opportunity for the two leaders to discuss measures to advance the North-U.S. nuclear negotiations.

Moon will fly to New York Sunday, said Yoon Young-chan, the presidential senior secretary for public affairs, in a press briefing in Seoul. When asked if the United States and the South have a shared understanding of the verification and inspection process of the North’s nuclear facilities, Yoon replied, “Measures to achieve complete denuclearization is something that we have discussed in detail with the United States for a long time. Thus, I believe that we will continue to deeply consider this issue with the U.S. government and other lines.”

On Tuesday, Heather Nauert, spokesperson for the U.S. State Department, hinted at an unprecedented visit by a sitting U.S. president to Pyongyang, possibly with Trump taking part in an open car parade alongside Kim, greeting a crowd of cheering North Koreans.

“That sunroof was something that was interesting to see,” said Heather Nauert, spokesperson of the U.S. State Department, in a briefing Tuesday remarking on the Moon-Kim summit. “We’ll have to work on whether or not we can get a sunroof next time we are there, if we do go there a next time.”

Nauert was referring to an iconic moment of the inter-Korean summit: Moon and Kim standing and waving together in the back of a black limousine to crowds lining Ryomyong Street in Pyongyang, a novel scene that was broadcast around the world.

Nauert had been asked whether the United States would be ready to join the two Koreas in advancing a declaration to end the 1950-53 Korean War.

But alongside suggesting a possible visit by Trump to Pyongyang in the future, Nauert also emphasized Washington wants to see “meaningful and verifiable actions toward the final, fully verified denuclearization of North Korea.”

The FFVD principle has been used by the State Department since July in place of the more commonly understood complete, verifiable and irreversible denuclearization, or CVID terminology. It has also continued to enforce stringent sanctions on the North.

Nauert said that the third Moon-Kim summit “represents in our view a historic opportunity for Chairman Kim to follow through on the commitments that he made to President Trump at the Singapore summit,” and in the inter-Korean April 27 Panmunjom Declaration.

President Trump last week confirmed he had received a letter from Kim calling for a second summit. The White House said that it is “open to” and “already in the process of coordinating” a second summit without providing further details,.

Addressing concerns that inter-Korean relations were advancing quicker than the denuclearization process, Nauert emphasized that Pompeo has stated that it will be a “process” and that Washington has its “eyes wide open.”

However, John Bolton, the U.S. national security adviser, emphasized Tuesday according to a Voice of America report that Washington wants an “elimination of all North Korea’s weapons of mass destruction programs, whatever they might be.”