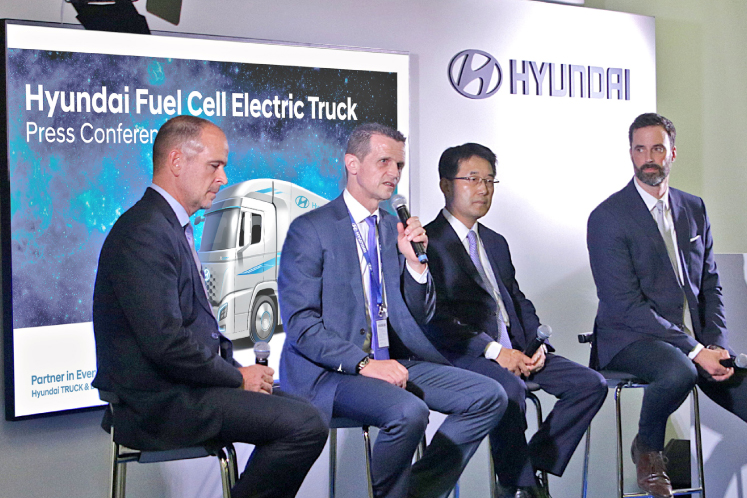 Hyundai Motor’s hydrogen-powered truck will take to the streets of Europe, where the hydrogen infrastructure is better than in Korea and subsidies for hydrogen cars more generous.

The nation’s No.1 carmaker announced Thursday that it signed a memorandum of understanding with Swiss hydrogen energy company H2 Energy to supply 1,000 large hydrogen trucks from 2019 to 2023.

They will include both refrigerated and unrefrigerated cargo trucks. H2 Energy will lease the trucks to local gas station companies and grocery franchises.

Under the partnership, Hyundai Motor and H2 Energy will try to expand the use of hydrogen-powered trucks not only in Switzerland but all over Europe.

The hydrogen-powered trucks being sent to Europe from next year are based on Hyundai Motor’s flagship large-sized Xcient truck. The development is near completion, Hyundai Motor says, to meet local transportation regulations.

The trucks will have 190 kW fuel-cell batteries.

They are expected to have a range of 400 kilometers (259 miles) per charge, which will take about 7 minutes.

In terms of safety features, they will have forward collision avoidance and lane departure warning systems.

Hyundai Motor explained that it is initiating its hydrogen truck business in Europe rather than Korea due to better infrastructure and state support as well as rising demand.

State support comes in various ways in European countries. Germany, for example, offers subsidies, while the Netherlands and Norway give tax incentives to people who purchase eco-friendly vehicles.

Switzerland, the first market for Hyundai Motor’s hydrogen-powered Xcients, has eliminated tolls on 3.5-ton or heavier trucks that run on eco-friendly engines. Trucks powered by diesel engines, in contrast, have to pay heavy tolls.

The carmaker plans to launch a midsized truck fueled by hydrogen in the near future that could be used for road cleaning or collecting garbage.