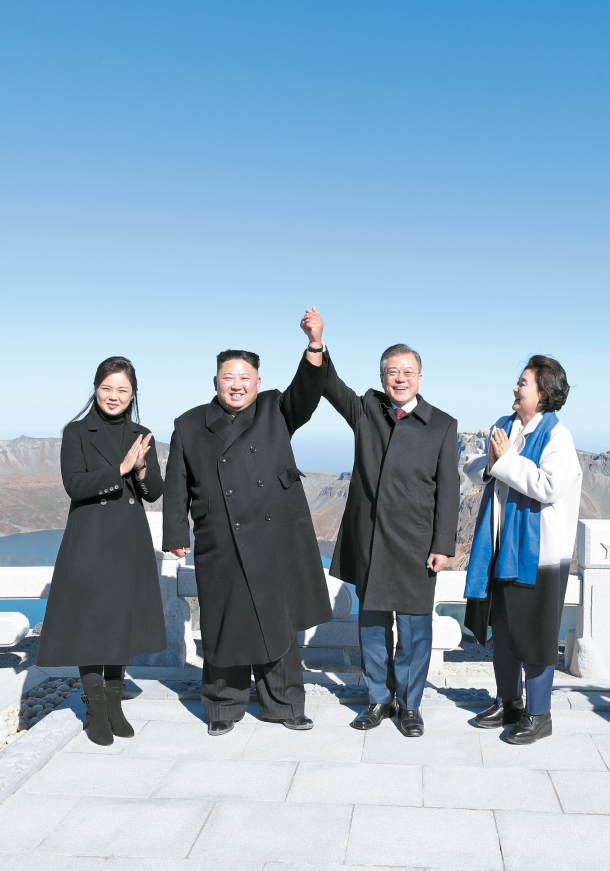 South Korean President Moon Jae-in, second from right, and the first lady, Kim Jung-sook, far right, pose with North Korean leader Kim Jong-un, second from left, and his wife, Ri Sol-ju, far left, on the top of Mount Paektu in North Korea on Thursday. The group visited the spiritual birthplace of the Korean nation in a show of unity after Moon and Kim’s third summit delivered new momentum in Pyongyang’s negotiations with Washington. [JOINT PRESS CORPS]

Leaders of the two Koreas vowed to open a new chapter in bilateral relations Thursday atop the highest mountain on the peninsula, Mount Paektu, before South Korean President Moon Jae-in and his delegation returned home from a three-day summit with North Korean leader Kim Jong-un.

Moon was offered several times in the past to climb Mount Paektu from the Chinese side, according to the South's presidential office, but declined because he wanted to climb it from the North.

Mount Paektu holds great cultural significance for both Koreas because it is considered the mythical birthplace of the Korean people. In North Korean society, it’s better known for something else: where founding father Kim Il Sung fought against Japanese colonial forces in the early 20th century, and where his son, Kim Jong-il, was born. (South Korean authorities believe Kim Jong-il was actually born in southeastern Russia.) 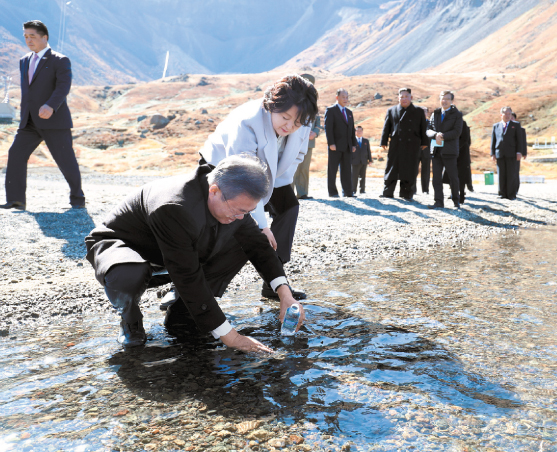 The mountain is a pillar of the personality cult surrounding North Korea’s ruling dynasty. The Blue House tried to distance itself from any controversy Moon could possibly face upon his arrival back home, stressing that Mount Paektu was a “spiritual mountain” for both countries.

Moon, his wife, his cabinet and closest aides from the Blue House flew from Pyongyang Sunan International Airport to Samjiyon Airport in Ryanggang Province, where the mountain is located, on the South Korean presidential plane. Shortly before then, South Korean pool reporters and members of Moon’s so-called “special delegation,” which includes political, business and cultural leaders, took an Air Koryo flight from Pyongyang to Samjiyon.

As Moon and his team got off their plane, Kim Jong-un and his wife, Ri, greeted them. According to pool reports, nearly 1,000 North Korean citizens holding flowers cheered as some 100 members of a military band played. The two Korean leaders inspected a 200-member honor guard.

Moon and first lady Kim got in a black sedan and were driven from the airport to Mount Paektu’s Janggun Peak, where the crater lake can be seen. Kim Jong-un and his wife traveled in a separate car.

“Chinese people envy us because they can’t reach the crater lake from China,” Kim Jong-un said, according to pool reports. “We can.”

The young leader vowed to “write a new history between the North and South” from the top of Mount Paektu.

“Only a few people have come today, but in the future, South Koreans and our people living abroad should come see Mount Paektu as well,” he said, adding that Mount Paektu has become a “mountain of longing” ever since both Koreas were separated by war because those in the South are unable to physically reach it.

Moon replied that the “first step” to the mountain has begun and said he believed South Koreans would be able travel to Mount Paektu “soon.”

Then Moon, Kim and their wives took a cable car to reach the crater lake for a commemorative photo. South Korean first lady Kim whipped out a plastic bottle that contained water from the crater lake of Jeju Island’s Mount Halla and poured some into Mount Paektu’s lake. Moon took the bottle and dipped it in the lake, combining water from the Korean Peninsula’s most iconic volcanoes.

The couples returned to Janggun Peak and drove down the mountain to grab lunch.

Moon, his wife, his cabinet and aides from the Blue House boarded the presidential plane at Samjiyon Airport at 3:30 p.m. and arrived at Seoul Air Base in Seongnam, Gyeonggi, two hours later. The delegation got on an Air Koryo plane to Pyongyang, after which they took another South Korean presidential plane to touch down in Seongnam.

Moon dropped by the press center at Dongdaemun Design Plaza in central Seoul on Thursday evening to give a briefing in front of cameras.

Asked whether the two Koreas reached any agreement to jointly operate tour programs to Mount Paektu, Yoon Young-chan, Moon’s senior secretary for public affairs, told reporters at the press center in Seoul that the countries have yet to “discuss closely” the issue.

Yoon said Kim Jong-un gave two tons of pine mushrooms to Moon as a gift, and that the present arrived at Seoul Air Base on Thursday before the president touched down. Kim Jong-un’s father, Kim Jong-il, gave the same gift to South Korean Presidents Kim Dae-jung and Roh Moo-hyun during their summits in 2000 and 2007, Yoon added.

The official said the government was going to distribute the mushrooms to South Korean families who haven’t seen their relatives in North Korea since the 1950-53 Korean War and who have never been invited to government-arranged reunions. Each family will be given 500 grams (1.1 pounds).

Yoon refused to say whether any other presents were shared between the two Korean leaders, saying it was not customary to discuss the topic. 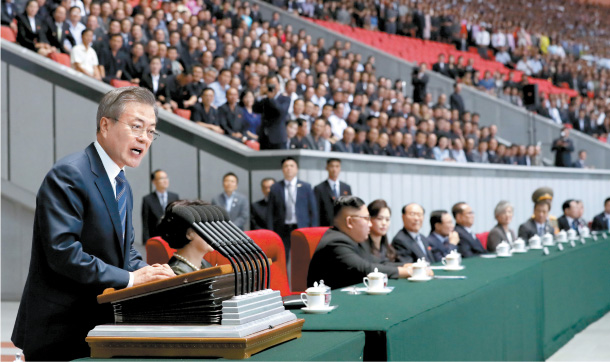 On Wednesday evening, the leaders and their wives had dinner at a seafood restaurant in Pyongyang. After dinner, Moon and his delegation watched a mass gymnastics performance titled “The Glorious Country” at May Day Stadium alongside Kim Jong-un and his wife. Around 150,000 North Korean spectators were in the stands.

Toward the end, Moon said in a speech to the entire crowd that he and Kim Jong-un agreed to free the Korean Peninsula of nuclear weapons and nuclear threats.