Gov’t reveals some locations of new apartments to be built

Gov’t reveals some locations of new apartments to be built 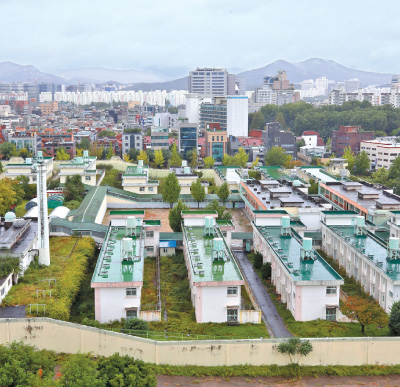 The former site of the Seongdong Detention Center in Songpa District, southeastern Seoul, on Friday. [YONHAP]

The government named 17 sites where 35,000 apartment units will be built in the greater Seoul area, one of its attempts to cool off the overheated real estate market.

This is the first batch of sites the government announced. An additional 13 sites and 265,000 units will be announced later, including four to five “new cities” to be built next to the first generation of new cities such as Ilsan and Bundang in Gyeonggi.

The Ministry of Land, Infrastructure and Transport on Friday said it plans to supply 10,000 apartment units in Seoul on 11 sites. However only two areas in Seoul were disclosed as it is still working with the Seoul city government. The ministry said the Seoul government will announce the nine remaining sites.

The ones that were disclosed were Songpa District, southeastern Seoul, where the relocated Seongdong Detention Center used to stand, and Gaepo-dong, Gangnam District, southern Seoul. The two sites that were named are located on the edge of the nation’s capital, contrary to previous speculation that they would be located in the center of the city.

Five cities in neighboring Gyeonggi Province were also designated for a total of 17,160 units on land of more than 1.9 million square meters in total.

One of the common traits of the plots is that they are close to transportation infrastructure from subways to highways and high-speed rail.

When announcing tougher real estate regulations last week that included limits on mortgages and heavier taxes on owners of multiple apartments, the ministry promised to announce sites that will hold 300,000 units.

“Due to the time constraints, we weren’t able to disclose more sites [where the apartments will be newly supplied],” Land Minister Kim Hyun-mee said on Friday.

“We plan on announcing a second batch of new sites by the end of the year by speeding up the process with the local government,” she continued, “and within the first half of next year announce all the sites for the 300,000 units.”