Rapper Zico impressed by his trip to North Korea

Rapper Zico impressed by his trip to North Korea 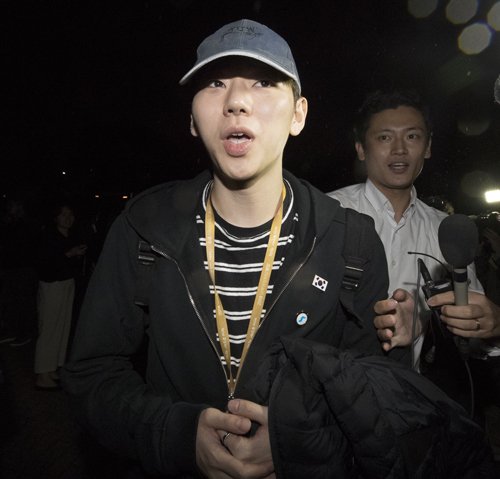 Zico just after his arrival in South Korea on Sept. 20, after his three-day trip to North Korea. [YONHAP]

Arriving from North Korea where he performed on the sidelines of the historic three-day inter-Korean summit, rapper Zico has said he was impressed by North Korean audiences who responded to his hip-hop performance.

Zico was part of the cultural delegation accompanying President Moon Jae-in in his visit for talks with North Korean leader Kim Jong-un Tuesday through Thursday.

Zico performed his 2017 hit song “Artist,” a funky hip-hop song filled with witty rap lines, during the dinner party thrown by Kim on the first day, along with his K-pop mates, Ailee and Ali.

Zico quoted First Lady Kim Jung-sook as calling him “the hottest person of the South Korean delegation” as she introduced him to Kim’s wife, Ri Sol-ju, at the beginning of the three-day trip.

“I was concerned whether the unfamiliar genre of hip-hop would fit the atmosphere,” Zico recalled in a phone interview with Yonhap News after his return on Thursday.

“But the response from the North Koreans made me brush off my concerns.”

“Usually, I ad lib ‘put your hands up’ [in English] in the middle of performance, but I replaced it with ‘raise your hands’ [in Korean] and the North Korean participants did put their hands above their heads,” Zico said.

Since Kim was seated far from the stage at that time, Zico did not see how the North Korean leader responded to his hip-hop performance, but he said “Overall, the environment was very friendly.”

What especially impressed Zico during the North Korean trip was Mount Paektu, the mountain on the Chinese border, where the South Korean delegation and Kim Jong-un and his wife climbed together on the last day of the summit.

“I still cannot believe that I have been to the volcanic lake [atop] Mount Paektu,” he said.

“On the way to the mountain, the car I was riding in had some problems and we arrived at the mountain later than others. When I arrived, I was mesmerized because it was so beautiful.

“It was an incredible spectacle. It is so large that you have to turn 360 degrees to see the scene completely,” he said.

The famous North Korean mass games and the Pyongyang specialty of cold noodles were also among things that captivated Zico.

“I was dumbfounded as I watched the performance, which was on a scale that I have not experienced before. When seen in person, it was bigger that what it seems [in pictures],” he said. The event brought together 150,000 North Koreans at the May Day Stadium in the capital.

“The Pyongyang naengmyeon we had [at Okryugwan restaurant] was the best I have had. It was up to my high expectations,” he said of the North Korean noodle dish.