All eyes on Gwangju

All eyes on Gwangju 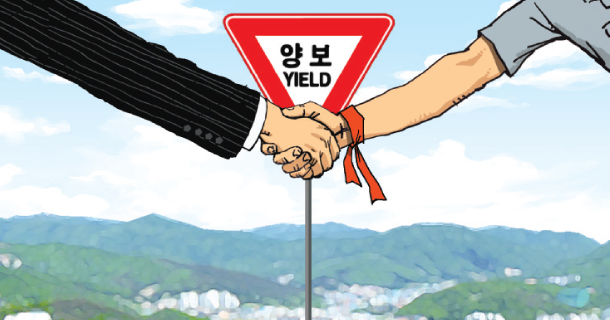 The construction of a car assembly factory, which is the core of the Gwangju job model, is about to flounder. The Federation of Korean Trade Unions (FKTU) announced that it would not participate in the negotiation for jobs in Gwangju on Sept. 9. The key to the Gwangju model was to realize fair wage level and encourage investment through an agreement among labor, management, community and government to create jobs. But if the labor representatives don’t cooperate, the business model does not work. While the Gwangju Metropolitan Government is still persuading the labor union, some say that the plan is already in the air.

The biggest cause for stalled negotiation is wages. Hyundai Motors and local labor unions that had expressed intention to participate in the program have a different idea of what constitutes a “fair wage,” and the city government hasn’t been able to mediate. The FKTU claims that the starting annual salary for production workers should be 40 million won ($35,800), but only 21 million won was offered. But Gwangju’s government explained that the union misunderstood, and about 30 to 40 million won was to be offered. An exact number would be set after business analysis.

There is a bigger obstacle than wages. The traction to reach a grand compromise is missing. The union is refusing to talk because of the low wages, but they will actually not be working at the new factory. Even if the project is canceled, existing union members won’t lose a job, and even if they agree to a lower wage, they won’t get paid less. So they have nothing to lose by leaving the table. Hyundai Motors is not desperate either. The domestic market is not likely to grow, and domestic wages are too high.

In the end, if the Gwangju model fails, the opportunities for local people to work for fair wages would disappear. So there is only one solution. For the jobless residents, Gwangju and the government should initiate the talks. But there have been a series of failures.
An insider who wishes to remain anonymous said that Mayor Lee Yong-seop’s four principles include joint management accountability for employees and employer. “Hyundai Motors struggled with hardline unions, so will Hyundai trust the mayor and participate in the project?” The labor unions also criticize the city for shifting responsibility to the workers. Neither the companies nor the unions participating in the project trust Gwangju.

Not many chances remain as trust has fallen. To make the project work, Gwangju needs to be able to turn the situation. The union and Hyundai Motors must remember that everyone is watching how sincerely they engage in the negotiation. The Gwangju model is already approaching the end of its golden time.