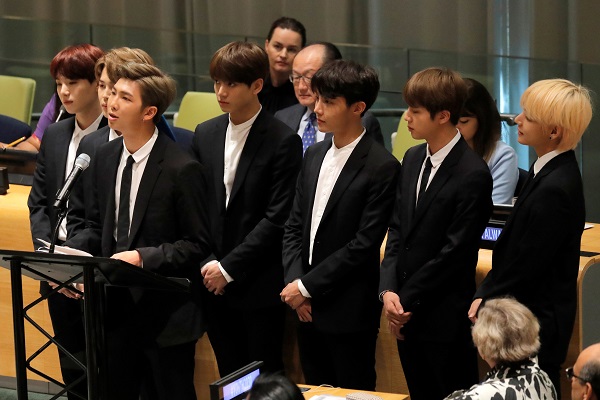 Kim Nam-jun, better known as lead singer RM, from boy band BTS speaks during an event held during the United Nations General Assembly on Monday. In his speech, the singer encouraged young people around the world to listen to their inner voice and resist the pressure to conform. [REUTERS/YONHAP]


After appearing in front of a global audience at the United Nations on Monday, K-pop sensation BTS mesmerized fans in the United States on Tuesday with an appearance on The Tonight Show Starring Jimmy Fallon in which they showed off their charm and dance skills before taking the stage to perform songs off of their latest album.

The group was full of energy from the moment they were introduced by Fallon, who donned a headband featuring Chimmy, a character designed by member Jimin for the group’s BT21 collaboration with Line Friends, much to the singer’s surprise.

Earlier in the show, the group took part in a segment titled “Fortnite Dance Challenge” with the host, in which they mimicked dance moves made famous by characters in the popular American video game Fortnite.

The challenge ended with Fallon learning a simple move from the choreography of the group’s new song “Idol,” and dancing together with the members.

After their interview, during which the group talked about their goal of going to the Grammys, the group took the stage for high-energy performances of “Idol” and “I’m Fine” in the studio, a stark difference from the serious ambience the group faced at the United Nations just a day earlier.

Fans in Korea burned the midnight oil during Chuseok, the national harvest holiday, on Monday to watch BTS become the first K-pop group to address the United Nations as part of the launch ceremony of Unicef’s global partnership Generation Unlimited in New York on Monday.

“No matter who you are, where you’re from, your skin color, your gender identity, just speak yourself,” group leader Kim Nam-jun told a packed hall at the launch of the Unicef campaign to promote education, training and employment.

The event kicked off during the annual gathering of world leaders at the United Nations.

Kim Nam-jun, who also calls himself RM, spoke of growing up in Ilsan, Korea, imagining he was a superhero and being “just a normal little boy” until self-doubt settled in at the age of nine or ten.

“I think that’s when I began to worry about what other people thought of me and started seeing myself though their eyes,” he said.

“I tried to jam myself into the molds that other people made.”

The lead singer of the world’s most popular boy band said there were times when he wanted to quit music but he overcame his insecurities by listening to the “small voice that said, wake up man, and listen to yourself.”

“I have many faults and I have many more fears but I am going to embrace myself as hard as I can and I am starting to love myself,” he said.

Among Korea’s best known and most lucrative musical exports, BTS made music history this year by becoming the first K-pop group to top the Billboard 200.

“BTS has become artists performing in huge stadiums and selling millions of records right now, but I am still an ordinary 24-year-old guy,” said Kim Nam-jun.

“We have learned to love ourselves, so now I urge you to ‘speak yourself’.” BTS is currently on its “Love Yourself” tour and will be performing in Newark, New Jersey this weekend. The group is set to perform at New York’s Citi Field on Oct. 6.