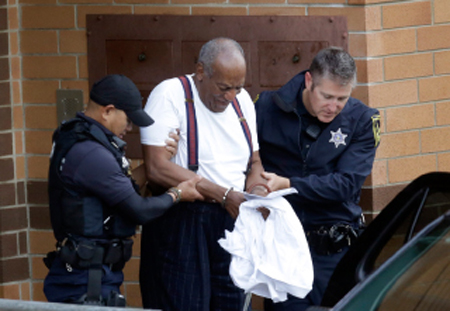 Disgraced television icon Bill Cosby was handcuffed and taken into custody Tuesday to begin a minimum three-year prison sentence for sexually assaulting a woman at his Philadelphia mansion 14 years ago.

The 81-year-old, once beloved by millions as “America’s Dad,” is the first celebrity convicted and sentenced for a sex crime since the fall of Harvey Weinstein ushered in the #MeToo movement and America’s reckoning with sexual harassment.

Found guilty on April 26 of drugging and molesting Andrea Constand, a former university basketball administrator, Cosby was impassive when Judge Steven O’Neill handed down the sentence in Norristown, Pennsylvania.

The judge rejected a defense request to release Cosby on bail pending an appeal. The now frail entertainer was slapped in handcuffs, and led out of court in his shirt and braces, his tie and jacket removed.

It makes him one of the most famous Americans ever sent to prison in a country where fame, wealth and expensive lawyers have tended to help celebrities avoid the full arm of the law in the past.

“You were convicted of a very serious crime,” O’Neill told Cosby. “No one is above the law.”

His sentence means that Cosby can apply for parole after three years. His requests will be reviewed by a special committee and can be rejected up to a maximum sentence of 10 years behind bars.

O’Neill also branded Cosby a “sexually violent predator,” a humiliating designation that will force him to register with police for the rest of his life and to submit to mandatory counseling.

Prosecutors had demanded five to 10 years, after the three counts of aggravated indecent assault were merged into one, saving him from a theoretical maximum sentence of 30 years.

Around 60 women, many of them onetime aspiring actresses and models, have publicly branded Cosby as a calculating, serial predator who plied victims with sedatives and alcohol to bed them over four decades.

Several of his accusers held a lengthy and tearful press conference hailing his prison term and saying they were finally able to turn the page on years of horrific memories.

Sunni Welles, 70, said Cosby drugged and raped her twice in 1965, destroying “very much a part of my life” and paid tribute to Constand, the only one whose claims were recent enough to be prosecuted.

“If she hadn’t been able to stand in court, we wouldn’t be standing here today,” Welles said.