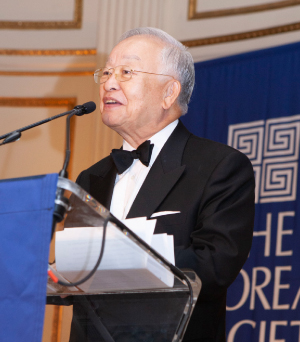 CJ said on Wednesday its Chairman Sohn Kyung-shik won the Van Fleet Award from the Korea Society on Sept. 21 in recognition of his role in promoting the Korean culture and Korea-U.S relations.

Korea Society is a non-profit organization dedicated to understanding and cooperation between the people in Korea and the United States.

“CJ will spearhead the efforts to spread the Korean culture and lifestyle across the globe and further contribute to the friendship and partnership between Korea and the United States,” said Chairman Sohn at the ceremony held at the Plaza Hotel in New York. By Seo Ji-eun