Fate of Yongbyon is a ‘big deal’: Hecker

Fate of Yongbyon is a ‘big deal’: Hecker 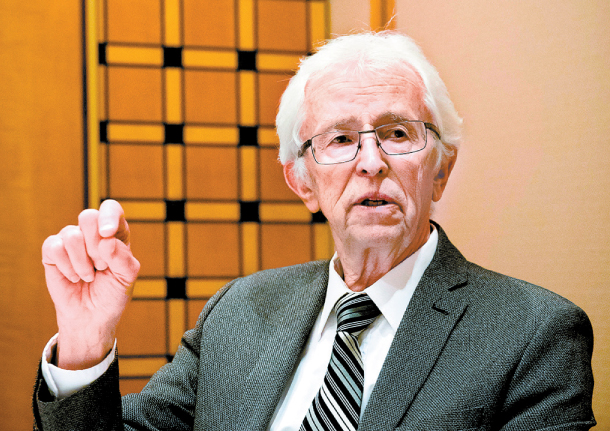 American nuclear scientist Siegfried S. Hecker said “demilitarization” of North Korea might be wiser than a complete denuclearization and the process could be sped up by converting its nuclear and missiles program into joint civilian-use projects.

Hecker, a former director of the Los Alamos National Laboratory in New Mexico and a professor emeritus at Stanford University, sat for an exclusive interview with the JoongAng Ilbo and Korea JoongAng Daily on Thursday at the Millennium Seoul Hilton in central Seoul, reflecting on the progress of nuclear talks with North Korea this year.

He said that if North Korean leader Kim Jong-un dismantles the Yongbyon nuclear facility, “That is a big deal; it would be a major positive, signal that they are serious. Because without plutonium, they will really not be able to have major improvements in their nuclear weapons program.”

Hecker in May proposed a 10-year road map for denuclearizing North Korea in three stages: a halt, roll back and elimination. He has estimated that denuclearization of the North could take up to 15 years, but that could be shortened depending on the political situation.

Hecker advocates shortening the time frame through the conversion of North Korea’s military nuclear and missile program into civilian use with the involvement of South Korea and the United States, and possibly China and Russia as well. This could be in areas as such as building nuclear reactors for electricity generation and medical isotopes and joint space programs.

“When you do it cooperatively, then that’s when verification becomes possible, because you’re there, you’re talking with the people, seeing the facilities,” said Hecker on such joint civilian nuclear projects. “It’s the only way I can see shortening that time frame significantly.”

He went onto encourage building “trust and a cooperative spirit” to prevent North Korea’s concealment of its nuclear weapons in the future.

“If the United States and South Korea stay together, clearly locked together in a strong alliance, we’ll be able to handle anything North Korea can do, and we can take a chance to see whether he’s really serious,” he said, referring to North Korean leader Kim.

Since 2004, Hecker has made seven trips to North Korea. In his first visit, he recounts holding in his hand North Korean plutonium in a sealed glass jar at its Yongbyon nuclear complex. He is also one of the few Americans who has visited its uranium enrichment facility, which he and a team did in 2010.

Hecker warned that last year we were on the “precipice of war,” welcoming efforts by South Korean President Moon Jae-in, U.S. President Donald Trump and North Korean leader Kim since the beginning of this year to engage in dialogue and summit meetings. He added that “it’s worth finding out” if North Korean leader Kim is serious about his pledges to complete denuclearization. Hecker later Thursday made a speech at Yonsei University as a part of its William J. Perry lecture series entitled: “North Korea’s Nuclear Weapons: A Treasured Sword or An Unnecessary Burden?”

Q. What do you think of the dramatic change in President Trump’s attitude to North Korea in his UN General Assembly speech Tuesday compared to last year’s speech?

A. From my perspective, it’s a very welcome change. Since I’m a technical nuclear specialist, I would say that 2017 was a very dangerous year. It was dangerous because of the technical advances that North Korea made with its nuclear programs, namely the big nuclear test, the ICBM [intercontinental ballistic] missile tests. That was dangerous, and then on top of that, the political rhetoric was extremely dangerous ... However, so many things happened in 2018, and the most important is that politically, we stepped away from the precipice of war, and that’s good news ...What happened is a number of really important political steps initiated to some extent by Kim Jong-un and President Moon but also apparently welcomed by President Trump.

How do you view the United States’ demand for North Korea to submit a list of nuclear weapons, materials and facilities as a first step toward substantive denuclearization, while North Korea demands a declaration to end the 1950-53 Korean War?

From my perspective, what’s more important first is to take steps that I call risk reduction. For example: no nuclear testing, no long-range missile tests and no more plutonium [production]. Perhaps a list of the Yongbyon facilities would be possible early on. But the full declaration, I think, is not yet possible. And then the end-of-war declaration, clearly that’s a political matter; the U.S. has to decide as to when to do that. Just like eventually there has to be a full declaration [by North Korea], eventually there has to be an end-of-war declaration.

At the inter-Korean summit in Pyongyang last week, Kim agreed to permanently dismantle the Tongchang-ri missile engine test site and missile launch pad under the observation of outside experts. Can this be considered as a meaningful progress toward denuclearization?

That’s not the ICBM launch site, and so whereas it’s important, it’s not the most important for missile launches because the North Koreans have launched their missiles from unprepared sites. So, what I found most surprising is for Chairman Kim to say that he’s going to essentially decommission that site that was scheduled to be used for future satellite launches ... and I would have thought North Korea would want to retain a peaceful space program. But having international inspectors there is good because it’s a confidence-building step.


North Korea said it is willing to take additional steps such as permanent dismantlement of the Yongbyon nuclear site if the United States takes a corresponding measure. Should Washington consider this proposal seriously?

Of course it should consider that seriously, but it’s a conditional proposal. So to me, the most important part would be: Can one begin to take the steps that demonstrate that they are actually dismantling parts of Yongbyon? Yongbyon is a huge facility. For example, it would be very important to first stop and then dismantle the 5-megawatt plutonium production reactor. If they did that, I would say that’s a really big deal ... it would be a major positive signal that they are serious.

Some say that the Yongbyon nuclear facility is already old and aging, so North Korea’s proposal is not meaningful.

It helps to have been there: I don’t agree with that. Yes, the Yongbyon facilities are old, but they are operable.

Contrary to your estimation that it could take 15 years to denuclearize North Korea, the United States and North Korea are talking about the completion of denuclearization by the end of Trump’s first term as president in 2021. Is this a feasible goal?

It would be very nice; I don’t think it’s possible. First of all, the political situation has now improved substantially, because we’re talking to each other, but one still has to build the trust to convince the North Koreans they can actually get rid of those substantial facilities. And I think that will take more than a few years. The technical matters will also take some time. My three-stage proposal was recognizing the difficulties in agreeing to actually take significant steps. I believe that immediate elimination of all nuclear weapons is not going to happen. So instead, let’s do this in a reasonable way. First halt - in other words, don’t make it worse. Second, take specific steps to roll back, reduce the threat - so no nuclear, no missile testing, no more plutonium. They’ve already done the first two. And then, understanding what the issues are with the uranium enrichment, because they have one facility we know of. I was in that facility for centrifuges in 2010. We know they have more facilities. I think it may be doable in 10 years, but again, it depends on political situations.

Trump said in a press conference Wednesday that he is not in a hurry and no longer playing a “time game” with North Korea. Has he realized denuclearization cannot be resolved in a short period of time?

I think the president and his team understand that it takes time ... What’s happened in 2018 was taking us away from the precipice of war. The political climate has toned down substantially, especially as just indicated with President Moon’s summit with Kim Jong-un. And because of that, politics has created space that now allows you to step back and do things in a more deliberate, sensible manner, and so now you have more time ... to do that sort of negotiation correctly.

In your June 25 Foreign Policy article, you claimed that helping North Korea to convert North Korea’s military nuclear and missile program into civilian use is the best way to solve the North Korean nuclear issue.

My view is, how can we shorten that 10-year time frame, and I believe that in an adversarial situation it won’t be possible because they would have to make a declaration, we’d have to verify the declaration, the verification isn’t just one time, you have to continue to watch the facilities, the people, what happens to all those things ... What benefit can be in denuclearization for the North Koreans from the nuclear and technical standpoint? First of all, say what we are after: Denuclearization should really mean demilitarization. In other words, everything in the nuclear complex and the missile complex that feeds the military program, that has to go. In order to get them to agree to that, then we actually turn around, in particular jointly with South Korea, and say we’re going to help you convert the military to peaceful use. And we’re going to it together. That’s the key ... Because that means we’ll have South Koreans, Americans in Yongbyon, helping them to convert. When you do it cooperatively, then that’s when verification becomes possible, because you’re there, you’re talking with the people, seeing the facilities. It’s the only way I can see, shortening that time frame significantly.

North Korea declared the completion of its nuclear arsenal and is no longer conducting nuclear or missile tests. Do you think that North Korea actually secured the ICBM capability to hit the U.S. mainland?

The bottom line is that I do not believe that North Korea today can deliver a nuclear-tipped ICBM to the United States, anywhere in the United States. And the reason for that is that they have the components, the pieces of what’s needed, but they have not done enough testing to pull those pieces together. However, to me, the issue is: Do they have a deterrent, the nuclear capability, to keep the U.S. out? I believe that they already have a deterrent: they most likely can put a nuclear warhead on the Scud and Rodong missiles that can reach South Korea and Japan.

North Korea’s blowing up of the Punggye-ri test site was not just a performance?

I think it was a substantial step. Could they can make more tunnels, yes, but it’s going to take much more time.