Moon urges UN not to leave North Korea behind

Moon urges UN not to leave North Korea behind 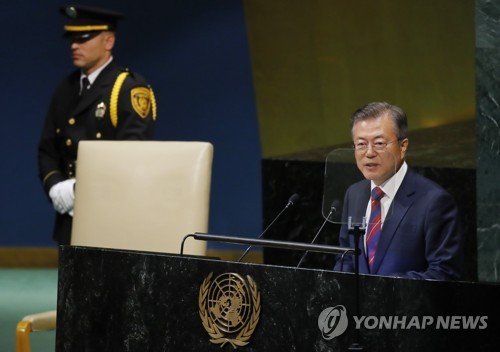 North Korea is sincerely moving down the path of complete denuclearization and its acceptance and inclusion by the international community will help further accelerate the process, South Korean President Moon Jae-in said Wednesday.

"North Korea on April 20 officially terminated its nuclear development policy, and has been focusing all its efforts on economic development," Moon said in his address to the United Nations General Assembly in New York.

"North Korea has come out of its long isolation on its own to stand before the world again," Moon said.

"Now, it is time for the international community to respond to North Korea's new choice and efforts," he added, devoting more than half of his rare address to the world body.

Moon's call for international support for efforts to denuclearize the North came after his trip to the communist state last week for his third and latest meeting with North Korean leader Kim Jong-un, in which Kim reportedly expressed his willingness to completely rid his country of nuclear weapons before U.S. President Donald Trump's four-year term ends in January 2021.

"We must provide assurance that Chairman Kim Jong-un's decision to denuclearize was the right choice. We must lead North Korea so it can continue to walk the path of permanent and stable peace," Moon told global leaders at the 73rd UN General Assembly.

"The UN is vowing not to leave anyone behind. I am confident North Korea will not stop its march toward peace and prosperity if the international community opens the way. South Korea will do all it can to lead North Korea to that path," he said.

The South Korean leader insisted denuclearizing North Korea will serve not only his country's own interests and those of the Northeast Asian region but the entire world.

"The process of denuclearizing the Korean Peninsula and establishing peace is also a process of making peace and bringing order in Northeast Asia," Moon said, noting the region accounted for one-fifth of the global population and one-fourth of the global economy.

"But (the region) is not moving toward great cooperation due to conflicts. We will begin removing conflicts in Northeast Asia, starting from the Korean Peninsula," he added.

To this end, Moon said both his country, North Korea and all others involved desperately need a formal end to the Korean War.

"The Korean Peninsula has been at a ceasefire for 65 years. An end to the war is very desperately needed. It is a process we must go through to reach a peace regime," he said.

The two Koreas technically remain at war as the Korean War ended with an armistice, not a peace treaty.

While meeting with Trump earlier in the week, the South Korean president insisted declaring an end to the 1950-53 war will only be a symbolic gesture to provide a security assurance to North Korea.

North Korea's Kim agreed to rid his country of nuclear weapons in his historic summit with Trump, held in Singapore in June, in exchange for security guarantees from the United States.

"I hope bold steps for denuclearization will be taken by related countries in the future and that they will lead to a declaration of the war's end," Moon told the UN General Assembly.

Moon promised increased contributions of his country for global causes, noting the country increased its financial support for refugees by five times over the past five years.

South Korea will also boost the ratio of electric power generated by renewable energy sources to 20 percent of its total power supply in 2030, he said.

"The country will faithfully meet its greenhouse gas reduction target and support sustainable development by helping the efforts of developing countries to deal with climate change," the president said.