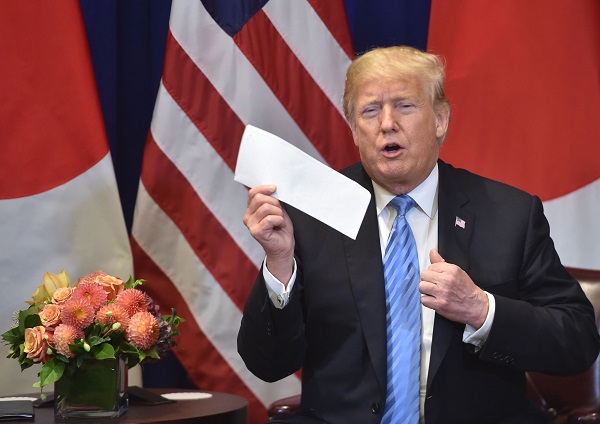 U.S. President Donald Trump shows a letter he said was from North Korean leader Kim Jong-un during a bilateral meeting with Japanese Prime Minister Shinzo Abe on Wednesday on the sidelines of the UN General Assembly in New York. [AFP/YONHAP]

U.S. President Donald Trump said Wednesday in New York that he did not have a time frame for the denuclearization of North Korea as U.S. Secretary of State Mike Pompeo prepares for a visit to Pyongyang next month.

“I think we’re really going to do something that’s going to be very important,” Trump said Wednesday during a news conference on the sidelines of the UN General Assembly, “but we’re not playing the time game.”

Trump continued, “If it takes two years, three years or five months -- doesn’t matter.”
Trump’s remarks came a week after South Korean President Moon Jae-in revealed that he was told by North Korean leader Kim Jong-un that the regime was willing to give up its nuclear arsenal by the end of Trump’s term in January 2021.

Pompeo quickly followed up on that statement while extending invitations to North Korean officials to meet in New York and Vienna, saying on Sept. 19 that the meetings “will mark the beginning of negotiations to transform U.S.-DPRK relations through the process of rapid denuclearization of North Korea to be completed by January 2021.” DPRK is an acronym for North Korea’s official name, the Democratic People’s Republic of Korea.

Hours before Trump made the “time game” remarks, Pompeo held a meeting with North Korean Foreign Minister Ri Yong-ho in New York, who relayed an invitation from Kim for Pompeo to visit the North Korean capital in October.

Heather Nauert, spokesperson for the U.S. State Department, said in a statement that Pompeo agreed to travel to Pyongyang to make further progress on the implementation of the commitments from the U.S.-North Korea summit last June and to prepare for a second summit between the two countries. Among those commitments, Nauert pointed out, is the final, fully verified denuclearization of the North.

Pompeo tweeted he had a “very positive” meeting with Ri to discuss the upcoming North Korea-U.S. summit and the “next steps toward denuclearization” of the North. “Much work remains, but we will continue to move forward,” he wrote.

Pompeo met with Kim in his first two visits. When he was in North Korea the third time, Kim did not meet with him during his three-day stay, raising speculation that denuclearization talks between the two countries were heading downhill. That especially seemed like the case in August when Trump canceled Pompeo’s fourth trip to Pyongyang just hours before the state secretary was about to leave.

Trump tweeted at the time: “I feel we are not making sufficient progress with respect to the denuclearization of the Korean Peninsula.”
During an interview with CBS News on Wednesday, Pompeo said Washington and Pyongyang haven’t pinned down a precise date for his North Korea visit yet, but that he’ll be traveling to the country “very soon.” The second summit between Kim and Trump, he continued, “may happen in October, but more likely sometime after that.”

“The location and date have not been set yet,” Pompeo said of the planned second summit in the CBS interview, “but we’re working diligently to make sure we get the conditions right so that we can accomplish as much as possible during this summit.”

Pompeo said the White House has been receiving “very consistent” messages from Kim, and that they were that the Pyongyang leader was “intent on denuclearizing.”

On the prospects that Trump and Kim might agree to sign a declaration to end the 1950-53 Korean War, which ended in an armistice, not a peace treaty, Pompeo replied it was “hard to know.” The regime has been eager to sign a war-ending declaration, which it sees as a sort of security guarantee. The United States, on the other hand, has been reluctant to sign one, saying major progress on the North’s denuclearization had to come first.

During a bilateral summit with Japanese Prime Minister Shinzo Abe, he whipped out a letter he said was from Kim, without disclosing the contents to reporters. It was not immediately known whether Abe knew either.

“I just showed a letter that I received yesterday from Chairman Kim, which is an extraordinary letter,” Trump said. “I’ve received other letters also from Chairman Kim. He wants to thing -- see things happen for North Korea that are great, that can make it an economic power. And they really have the potential to be that.”

Trump extolled Kim’s leadership, saying that, under his rule, the North had “tremendous economic potential.” Nevertheless, sanctions will remain in place, he underscored.