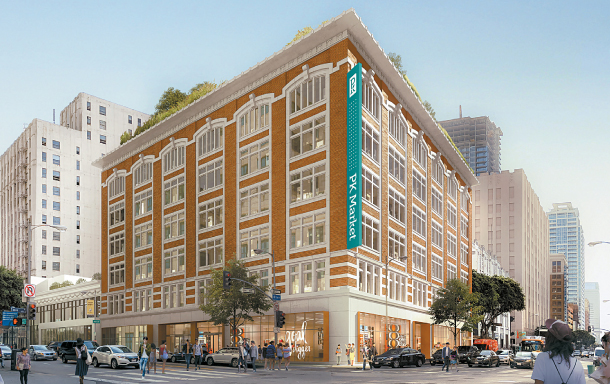 A computer-generated image of the PK Market in Los Angeles. The store is set to open in the second half of 2019 and will be Emart’s first brick-and-mortar business in the United States. [EMART]

Discount chain Emart will launch its PK Market grocery store chain in downtown Los Angeles in the second half of next year.

This is Emart’s first expansion into the U.S. market.

The company said Friday that it signed a 10-year contract on a 4,803-square-meter (1.18-acre) space inside LA Jewelry Mart, which is located in the Jewelry District of Downtown Los Angeles.

“As the rent contract was signed, we’re now able to further embark on procedures to plan for our business in the United States,” Emart said in a statement.

During the contract period, Emart will occupy three floors of the six-floor building. PK Market will take up the basement and second floors, while the third floor is planned to be used as an office for the local discount chain.

This red-brick structure was built in 1916 and was first used to house the Ville de Paris department store. In the building’s early days, the neighborhood was the city’s commercial center and had one of the largest jewelry districts in the United States.

Downtown Los Angeles lost its shine in recent decades compared to other areas of the city, but development projects in the area have increased lately as more people and proprietors are getting interested in the charm of the old district.

Emart said it approved of the location, considering that there are a number of ongoing developments that will transform the area once they are completed.

“The building itself sits inside the Historic Core where the city office is, near South Park and the Financial District - it’s a part of town that has quite a floating population,” the company said.

Emart’s plan to take its brick-and-mortar business to the United States - a rare move for a Korean retailer - was unveiled in March by Shinsegae Vice President Chung Yong-jin. Chung said the U.S. version of PK Market will present a wide array of Asian foods, including Korean products.

PK Market currently has branches in the Starfield malls in Hanam and Goyang, Gyeonggi. It is built around a “grocerant” concept, in which restaurants, food stalls and a high-end grocery store coexist in one space.

Emart added that, while the concept will remain the same, the name PK Market may be changed for the U.S. market.