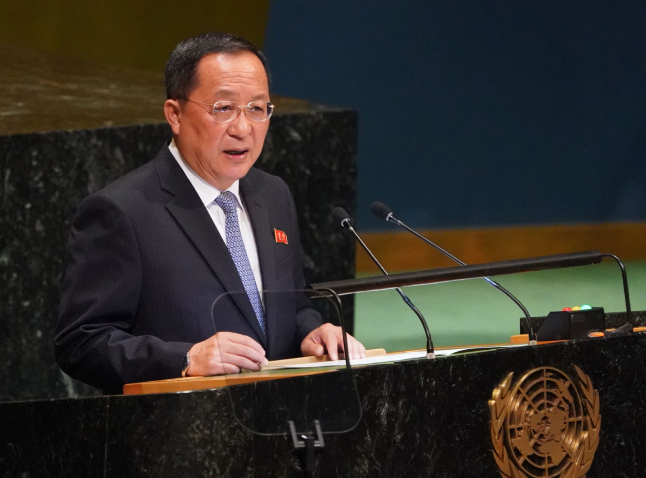 “Without any trust in the U.S., there will be no confidence in our national security, and under such circumstances, there is no way we will unilaterally disarm ourselves first,” said Ri in a speech at the UN General Assembly, as the two countries are working toward a second North-U.S. summit and putting back on track a return to stalled denuclearization talks.

Ri went on to underscore that the North Korean government’s “commitment to denuclearization is solid and firm,” but added, “it is only possible if the U.S. secures our sufficient trust.”

He noted that North Korea, even before the June 12 summit in Singapore between North Korean leader Kim Jong-un and U.S. President Donald Trump, “took significant good-will measures,” including stopping its nuclear and intercontinental ballistic missile (ICBM) tests and dismantling its Punggye-ri nuclear test site in late May.

“However, we do not see any corresponding response from the United States,” he continued.

Instead, Ri said that Washington has been insisting on a “denuclearization first” policy, increasing sanctions pressure on the North “in a coercive manner” and objecting to a declaration of the end of the 1950-53 Korean War, which ended with an armistice agreement.

A declaration to end the war could be seen by North Korea as a gesture by the United States toward guaranteeing its regime security. Pyongyang has also been seeking some form of sanctions relief, though Washington has maintained they it will not be lifting sanctions until the North completely denuclearizes.

Ri further criticized the UN Command stationed in Korea, saying it “only obeys the orders of the United States,” and is hindering the implementation of the inter-Korean Panmunjom Declaration of April 27. He then expressed frustrations at the UN Security Council for not easing of sanctions despite the North’s overtures toward peace.

Such American “coercive methods” are “lethal to trust-building,” said Ri, and are the “reason behind the recent deadlock” in North-U.S. denuclearization talks.

Pyongyang has been emphasizing that the ball is now in Washington’s court and appears to await what response Pompeo will bring in his fourth visit to Pyongyang.

However, Ri’s speech at the United Nations contrasted sharply with the belligerent tone he took on Washington last year at the peak of tensions on the Korean Peninsula.

During last year’s address to the UN General Assembly, Trump threatened to “totally destroy” North Korea, adding, “Rocket Man is on a suicide mission,” referring to his then favorite moniker for Kim Jong-un. In his turn at the UN address one year ago, Ri said, that “Trump himself is on a suicide mission” and boasted that the North has “entered a phase of completing the state nuclear force” after its sixth nuclear test on Sept. 3, 2017.

However, in his address last Tuesday to the General Assembly, Trump thanked Kim for his “courage” and said that he seeks through engagement with the North to “replace the specter of conflict with a bold and new push for peace.”

In a similar note, Ri in his speech this year outlined Kim’s strategy, announced in April, of “concentrating all efforts on the socialist economic construction” and a vision for the Korean Peninsula to become the “cradle of peace and prosperity that contributes to security in Asia.”

Likewise, Ri was careful not to directly insult President Trump in his speech and blamed the U.S. “political opposition” for making it “their daily business to slander the DPRK,” using the acronym for the North’s official name, the Democratic People’s Republic of Korea, for the “sole purpose of attacking their political opponent” and “impeding the smooth progress of the dialogue and negotiations.”

He emphasized that North Korea’s position is for the denuclearization of the Korean Peninsula to be realized “along with building a peace regime under the principle of simultaneous actions, step by step, starting with what we can do and giving priority to trust-building.”

In his UN speech, Ri used some variation of the word “trust” 19 times, stressing the importance of North Korea being able to have confidence in the United States.

He went on to point to the “recent dramatic improvement of the North-South relations and the atmosphere of cooperation,” noting the three inter-Korean summits this year, as demonstrating how “decisive the role of trust-building can be.”

Under the Pyongyang Declaration of Sept. 19, signed by South Korean President Moon Jae-in and Kim, North Korea said it is willing to permanently dismantle the North’s Tongchang-ri missile engine test site and launch platform, under the observation of international experts, and further permanently dismantle the North’s Yongbyon nuclear complex if the United States takes “corresponding measures.”

President Trump in a rally in Wheeling, West Virginia, later Saturday, recalled the evolution of his relationship with Kim Jong-un over the past year, noting, “We’ve come a long way.”

“I was really being tough and so was he,” said Trump. “And we were going back and forth, and then we fell in love.”

He noted Kim “wrote me beautiful letters,” in a continuation of the positive tone he took on North Korea at his General Assembly address last week. The two leaders have built up their a relationship through the exchange of such personal letters. Trump received at least five letters from Kim this year, the latest made public last Wednesday.

Noting he has made no concessions to North Korea thus far - aside from meeting Kim - Trump reaffirmed at the rally, “We’re going to have another meeting.”

Secretary of State Pompeo and Ri met on the sidelines of the UN General Assembly last Wednesday to plan Pompeo’s fourth Pyongyang visit, after such a trip was canceled abruptly in late August because of a lack of progress in denuclearization talks.

On Thursday, Pompeo chaired a UN Security Council meeting, also attended by South Korean Foreign Minister Kang Kyung-wha, who shared the outcome of the most recent inter-Korean summit in Pyongyang. Seoul, she said, is committed to faithfully implementing UN sanctions even as it continues to engage with the North.

Kang did not have a bilateral meeting with Ri on the sidelines of the General Assembly during her trip to New York, which concluded Saturday, despite having requested a meeting. Ri, however, did meet with foreign ministers of other key neighboring countries, Russia, China and Japan.