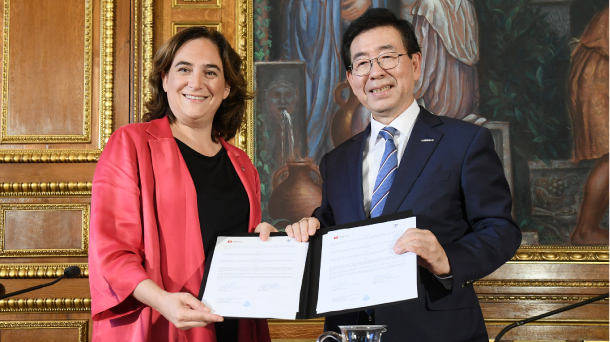 BARCELONA - Seoul Mayor Park Won-soon reaffirmed his city’s ties with Barcelona by signing an accord to boost cooperation on participatory democracy, innovation and smart cities development at the Barcelona City Hall on Friday.

“Through this accord to strengthen the Friendship City status, we will see deeper cooperation between the two cities on participatory democracy and innovative and smart urban development,” Park said.

“We signed the agreement [on Friendship City status] in 2012 and we are glad to be able to strengthen our relations through the accord today,” said Ada Colau, mayor of Barcelona. “When we think of cities in Asia, they feel somewhat distant from us in Europe, but this accord today has made us feel very close to Seoul and Korea.”

In 2012, the two cities agreed to cooperate on urbanization, smart city development and e-government, trade and investment, as well as on cultural events, environmental protection and in the sports sector.

Friendship City agreements precede official registration as sister cities, which needs the approval of the Seoul Metropolitan Council. Seoul has ties with 42 friendship cities and 23 sister cities, according to the city government.

“The accord to strengthen the Friendship City status this time expands and specifies the areas the two cities will cooperate on,” the Seoul Metropolitan Government said in a statement Friday. “There are a total of 17 areas including direct democracy, civic participation, innovation, sharing economy, inclusive growth, job creation, technological advancement and social innovation.”

Barcelona has been experimenting with blockchain technology in its administration.

“We are recognizing the importance of technological innovation and democratic citizen participation across the entire city hall,” said Francesca Bria, commissioner for digital technology and innovation of the Barcelona City Council, when addressing the mayor and his visitors from Seoul earlier on Friday.

“We have a pilot project on a participatory democracy platform that uses blockchain technology,” Bria said. “With the blockchain technology, citizens can sign petitions in an encrypted way when they use the platform we created to share data and they can be sure that nobody else can access the data. We do this to protect the personal data of citizens.”

In 2016, the Barcelona City Council launched an open-source software and open code platform called Decidim.Barcelona that shares information about the city government’s decisions and invites ordinary citizens to contribute. The city council is experimenting with integrating blockchain technology into the platform.

Seoul also launched a participatory democracy platform last October, though it has not incorporated blockchain technology. It was an upgraded version of an online website from 2006 on which Seoulites could make policy suggestions. The new platform, the city government said, enables the people who make suggestions to see whether that suggestion was applied in a policymaking process, which was not possible before.

“Not a lot of cities have such platforms,” Park said. “And we can take a step further with blockchain technology which will help protect information about citizens who make policy suggestions to the city government and still keep everything accountable.

“The two cities are making mutual progress in digital innovation,” he said. “We are cities with lots of similarities and I am positive our cooperation will bring much benefit to both sides.”

Park is traveling through Spain, Switzerland and Estonia until Oct. 7 to bridge ties with cities on sustainable urban development.