KIM SU-JEONG
The author is an editorial writer at the JoongAng Ilbo. 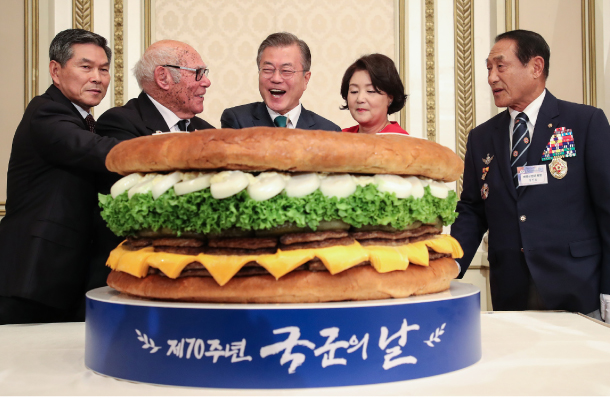 President Moon Jae-in, his wife and other military leaders cut the cake at the Blue House to celebrate the founding of the Korean Army 70 years ago. [YONHAP]

The South Korean soldiers who risked their lives to defend the country from North Korea’s aggression on June 25, 1950, made today’s Republic of Korea possible.

Oct. 1 is Armed Forces Day, marking the completion of Korea’s Army, Navy and Air Force in 1949 — and the day that South Korean forces broke through the 38th parallel and struck back in 1950. It is the day that the Armed Forces show off its readiness to South Korean citizens.
This year is also the 70th anniversary of the founding of the South Korean military.

Since the first celebration in 1956, military parades have been a symbolic gesture. After 1993, grand parades happened every five years, and smaller events were held at Gyeryongdae in other years. For the past 70 years, the South Korean Armed Forces have grown thanks to its servicemen.

They also contributed to international security by fighting off any provocations by North Korea. But the ceremony that could have been the biggest in history was held at the War Memorial in Yongsan District, central Seoul, in the evening. A military parade was not held. The highlight of the show was performances by Psy and girl groups.

The Ministry of Defense explained that the military parade is usually held in dictatorial countries, and it is very hard for soldiers to prepare the event during the summer. The ministry also said that the celebration was so that the soldiers can enjoy this year.
There had been excessive events and mass mobilization, but it is no longer the case. I find it rather discomforting that the morale-boosting concert was revived, though it is not on television anymore.

I want to ask the Blue House officials who said they were impressed by the 150,000 people in Pyongyang who waved paper flowers at the airport and attended the event at a stadium. Why was the 70th anniversary of the military’s founding celebrated with a concert?

At the Seoul City Hall plaza, you can find the exhibition celebrating the 68th anniversary of the recapture of Seoul during the Korean War.
“The Korean and U.S. Forces reclaimed Seoul 11 days after the operation began on Sept. 18, 1950,” it says. But who invaded Seoul and when cannot be found. It simply says, “The enemies were driven away.”

Superintendents who are friendly to the progressive Korean Teachers and Education Workers Union recently distributed supplementary history material that does not state “liberal democracy” and “southward invasion.”

There is even an attempt to change the Armed Forces Day to Sept. 17 — the day when the Korean Liberation Army, the armed force of the provisional government of the Republic of Korea in Shanghai, was established. However, Monday was the 70th anniversary of the ROK Armed Forces that defended the country against the North’s invasion and provocation.