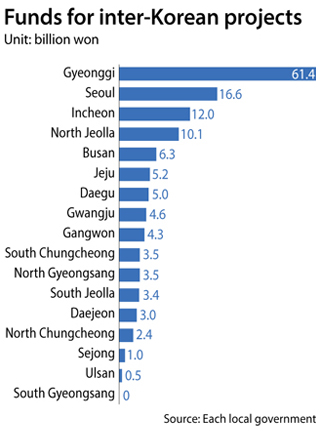 Moon’s remarks on Sept. 20 went a step further than the April 25 Panmunjom Declaration. The earlier statement said that both Koreas agreed to boost exchanges, visits and contacts “at all levels” to “rejuvenate the sense of national reconciliation and unity.”

Civil servants in North Gyeongsang said the provincial government wants to hold a 2021 edition of its biannual Gyeongju World Culture Expo in the North Korean capital of Pyongyang, and is now searching for a civic group with experience working with the regime. Kim Yong-sun, who once oversaw inter-Korean ties within the North’s ruling Workers’ Party, led a delegation to Gyeongju in 2000, when the festival screened North Korean films.

The provincial office started setting aside a budget for inter-Korean initiatives in 2013, and has amassed 3.5 billion won ($3.15 million) in total. The province wants to collect 500 million won more by the end of this year. By 2025, North Gyeongsang hopes to secure at least 10 billion won.

Gyeonggi, which borders the North along the Yellow Sea, has set aside 61.4 billion won so far, including 20 billion won as part of supplementary budget it passed last month. Among all regional metropolitan and provincial governments, Gyeonggi has dedicated the most to inter-Korean cooperation. A Gyeonggi official said the office was looking forward to using the fund when actual inter-Korean cooperation resumes.

Incheon has saved 11 billion won, including 1 billion won it additionally set aside last month. It plans to add at least 2 billion won more next year to bring the total to 13 billion won. Ulsan, which used to have no budget for cross-border projects, created a new 500-million-won fund this year. The South Gyeongsang provincial government office, which abolished its South-North fund in 2015 during the conservative Park Geun-hye administration, decided to revive it by the end of this year. It set aside 2 billion won next year, and set the goal of adding 1 billion won annually until 2022.