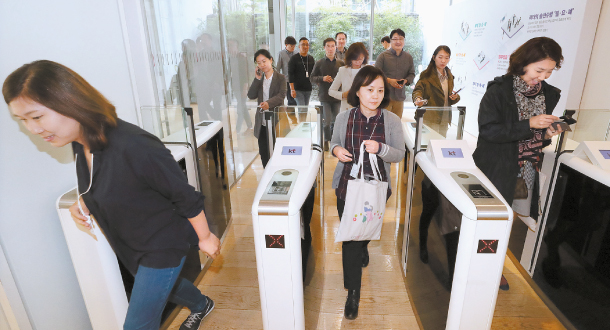 KT employees leave work at the KT Gwanghwamun East building. The mobile carrier’s big data team said in a report on Tuesday that the implementation of the 52-hour workweek is making workers head off earlier and spend more on leisure. [KT]

When Ms. Kim, a worker at a tech company in Pangyo, Gyeonggi, clocks off at exactly 5 p.m. every day, she heads straight to the gym from work.

She wasn’t able to do that until recently.

After Korea implemented a new 52-hour limit on workweeks in July, executives at her company insisted that everyone stop working overtime. Some executives started leaving work much earlier than usual. Junior workers, who often waited idle until their seniors went home, now have more free time.

“Our company tried to provide work-life balance before,” Kim said. “But directions on our working hours have become more explicit after the enforcement of the new policy.”

Three months have passed since the maximum workweek at companies with 300 or more employees shrank from 68 hours to 52 hours. A report from KT’s big data team, released on Tuesday, said that the policy is making workers head off earlier and spend more on leisure.

The mobile carrier’s research showed that workers in Gwanghwamun, central Seoul, where many major government agencies and conglomerates are located, spent 55 minutes less in the office area on average from Aug. 1 through Sept. 16. In Pangyo, home to the country’s top tech and gaming companies, workers spent an average of 11.6 minutes fewer in the area during the same period.

At the Gasan Digital Complex in Geumcheon District, western Seoul, where many small and midsize companies with fewer than 300 employees are located, employees actually stayed five minutes longer at work.

KT research also showed that commuting hours have become more flexible. While 26 percent of the employees working in Gwanghwamun used to start work at between 7:30 a.m. and 8 a.m. last year, those numbers decreased to 15 percent. Employees who started work from between 8:30 a.m. and 9 a.m., however, increased from 21 percent of the total commuters to Gwanghwamun last year to 38 percent this year.

The carrier was able to track the floating population in various office areas based on the signals their cell phones exchanged with KT’s base stations. KT considered a person to be working at Gwanghwamun when his or her phone was connected with the same base station in the city for more than four hours between 9 a.m. and 6 p.m. for at least 10 days a month.

KT included data from BC Card in its report. The data showed that workers’ spending on leisure increased by an average of 9.2 percent or 1.6 billion won ($1.4 million) over 2017 from Aug. 19 through Sept. 15.

The card company also found that revenue made after 6 p.m. at restaurants and bars around major work areas like Gwanghwamun declined by as much as 14.7 percent compared to the previous year. According to the mobile carrier, workers are moving to homes after finishing work early for dining and leisure activities.

“We have seen through big data that workers’ average hours are decreasing and their lifestyles are changing,” said Yun Hye-jung, head of KT’s big data business unit. “KT will come up with new services that fit consumers’ new lifestyles based on our expertise in big data analysis.”