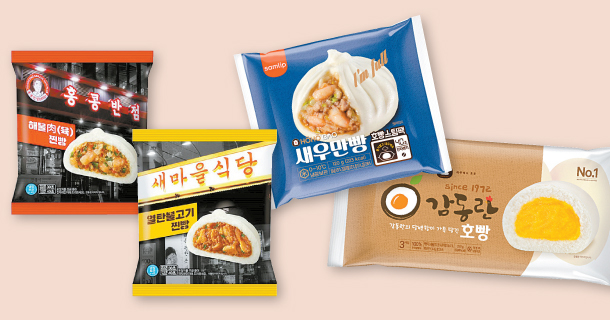 The appearance of hoppang in convenience stores has long been an indicator that cold weather is approaching in Korea.

For generations, the steamed buns have had red bean paste at the center. But this tradition is changing as manufacturers experiment with new types of fillings.

The company said Tuesday that it would release two hoppang products based on dishes from Baek’s most successful franchises: barbecue restaurant Saemaul Sikdang and Chinese restaurant Hong Kong Banjum 0410. The buns will hit the market this month. 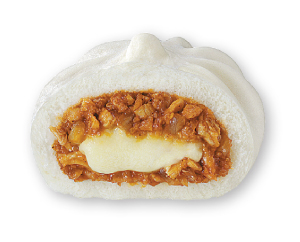 Saemaul Sikdang’s best-selling pork bulgogi (grilled marinated meat) dish will be made into a hoppang filling. Hong Kong Banjum 0410’s dumpling with seafood and pork in a spicy sauce will be converted into a hoppang at CU.

Last year, CU presented two versions based from pork dishes: one with pork and chives, like Chinese-style dumplings, and the other a stir-fried dish of pork and red chilies, a dish frequently sold at Chinese restaurants in Korea.

After a successful launch last year, the company will restart sales of the series this Thursday. It will add pork marinated in soy sauce to the lineup. The ones released last year also received a recipe upgrade to contain more meat and have a stronger taste of scallions, which in Korea is strongly associated with Chinese cuisine.

“We plan to improve our lineup of unconventional products, as we’re already receiving requests from social media to release hoppang varieties using tteokbokki [spicy rice cakes] and cheese,” said Choi Yoo-rim, a merchandiser of snacks and food at CU.

GS25 prepared 10 varieties of hoppang this year, and they start sales on Thursday. Eight of them don’t contain the traditional red bean paste.

“Red bean paste hoppang used to make up 53.5 percent of all hoppang varieties in 2015, but last year, non-red bean products like pizza hoppang accounted for 67.2 percent of all sales,” the company said.

GS25’s most unusual new option is the Cheese Buldak Hoppang, which features chicken marinated in an extremely spicy sauce and a piece of mozzarella cheese at its center. One new release has a yellow-colored filling made with custard cream, so that the hoppang itself looks like a half-cooked egg. The Honey Seed Hoppang was inspired by the Korean street food hotteok, a pancake with various seeds, nuts and honey inside.

The last two, which were released last year, contain shrimp and meat. GS25 said the two varieties were modified to have a thinner layer of bread and more meat to make them taste more like dumplings. GS25 added that hoppang sales are increasing by an average of 17 percent every year.