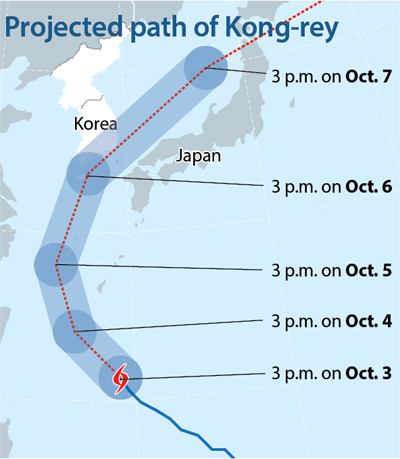 Typhoon Kong-rey is expected to bring heavy rains and strong winds to the southern regions and soak the entire country this weekend, according to the weather forecast agency.

The Korea Meteorological Administration announced Wednesday that Kong-rey, which developed from the Western Pacific island of Guam last Saturday and recently passed waters off Okinawa in the southern part of Japan, will reach the coastal waters of Korea’s southernmost Jeju Island Friday morning, affecting inland Jeju that night.

Kong-rey is expected to touch down at a point 190 kilometers (118 miles) northwest of Seogwipo, Jeju Island, at 9 a.m. on Saturday and pass through the South Sea, creeping towards a point 120 kilometers east of the Dokdo islets by 9 a.m. on Sunday, the weather agency added. The typhoon will likely lose strength as it heads north from the South Sea.

The last time a typhoon has directly affected the country in the month of October was 2016, when Typhoon Chaba slammed through southern areas, killing at least seven people, paralyzing flights and trains as well as knocking out power for a few hours.

At the time, over 1,000 hectares of farmland was flooded in South Jeolla, 950 cars got trapped in waters in Ulsan and Jeju, and some 210,000 houses lost power in Jeju, South Jeolla and South Gyeongsang.

By 9 a.m. on Wednesday, Kong-rey was heading northwest from a point 710 kilometers south-southeast of Okinawa at a speed of 18 kilometers per hour, the Korea Meteorological Administration said. The typhoon had an atmospheric pressure of 930 hectopascals at its center and the maximum wind speed was 180 kilometers per hour.