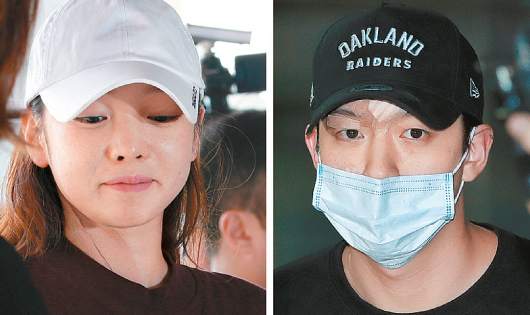 Singer-turned-actor Koo Ha-ra, left, claims that her ex-boyfriend has threatened to release videos of the two having sexual intercourse, according to Dispatch, a local news outlet, on Thursday.

In the report, Koo said that the videos had been taken without her consent or awareness.

On Sept. 10, after a fight between the couple took place, Koo claims that Choi sent the two videos to her and threatened that he would end her life as a star. Koo went down on her knees to beg Choi not do so - a scene that was recorded on surveillance camera footage.

According to Dispatch, the news outlet had been aware of the videos, but did not report on it as requested by the star. Nevertheless, Koo decided to come forward with the whole truth.

Reports on Koo’s physical abuse of her boyfriend were first received by police on Sept. 13. According to Koo’s ex-boyfriend, a hairdresser surnamed Choi, Koo inflicted harm on him after he told Koo he wanted to break up. “It was a one-sided assault, and anything I did was only self-defense,” Choi claimed in an interview.

On Sept. 17, Koo refuted Choi’s allegations against her and claimed that Choi kicked her first. He grabbed her hair and pushed her again, and in the process, she attacked him too. According to Koo, the harm came from both sides.

Koo had revealed that she intended to settle with Choi to bring things to an end, but stated on Thursday that she had reported Choi to the police on grounds of blackmail and sexual assault.

Choi first met with the police on Sept. 17, followed by Koo the next day. Both will be summoned by the police for further questioning.