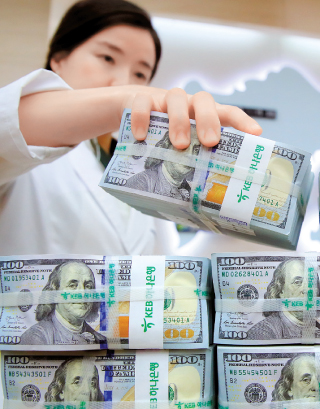 A KEB Hana Bank employee stacksup dollars at a bank branch in Seoul on Thursday. [YONHAP]

Korea’s foreign exchange reserves reached a record high in September on the back of steady gains from investments and the selling of foreign exchange stabilization bonds, the central bank said Thursday.

The total value of the country’s foreign exchange reserves came to $403 billion last month, up $1.87 billion from a month earlier, according to the Bank of Korea (BOK).

The total has set record highs for five months in a row from March.

The on-month gain was attributed to a rise in profits from foreign asset investments and the issuance of foreign exchange stabilization bonds worth 1 billion won, according to the BOK.

Of the reserves, the value of foreign securities, like government and corporate debts, grew $2.79 billion on-month to stand at $375.63 billion in September.

The country’s reserve position at the IMF stood at $1.91 billion at the end of last month, while holdings in gold bullion were worth $4.79 billion, the central bank said.

As of end-August, Korea ranked eighth in the world in terms of the amount of foreign reserve holdings. China topped the list, followed by Japan, Switzerland, Saudi Arabia and Russia, according to the BOK.