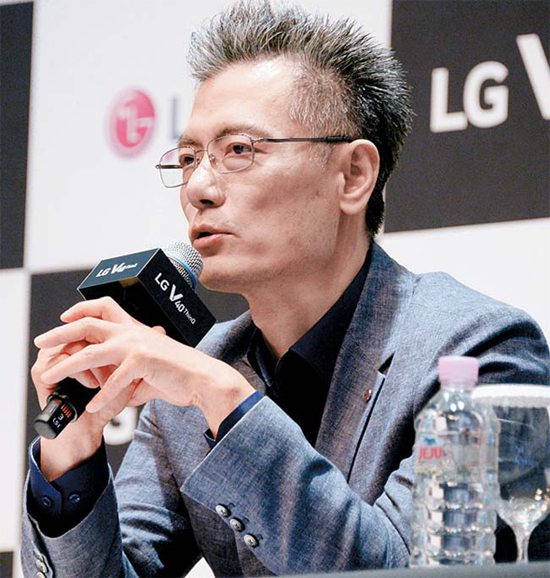 LG Electronics is betting big on cameras with the latest version of its premium V series smartphone, the LG V40 ThinQ, which the company unveiled on Thursday in Seoul.

LG mounted a total of five cameras on the phone to target today’s photo and video-focused consumers. According to the Korean electronics giant, 87 percent of 1,000 people it surveyed in September said the most frequently used feature on their smartphones is the camera.

The phone has three different lenses in the rear: a 16 megapixel (MP) super wide angle lens, a 12MP standard angle lens and a 12MP telephoto lens. It also has two more lenses in the front.

“The three lenses allow for shutterbugs to frame different shots without changing their position relative to the subject,” LG said in statement. The 107-degree super-wide angle lens captures subjects with more of the background, while the telephoto lens with optical zoom can take clear shots of subjects from a distance without compromising image quality.

LG’s design follows Huawei’s launch in March of the P20 Pro, the world’s first phone with three rear camera lenses. Huawei’s phone triggered a battle in the industry to add more cameras to phones to offer different ranges of focus and zoom. Samsung Electronics also announced last month that its lower-end Galaxy A7 phone will come with three rear-facing cameras.

LG said it is also trying to differentiate its phone in other ways beyond its many cameras.

“It’s more about the performance of our cameras,” said Hwang Jeong-hwan, the chief of the mobile communications division at LG. “We upgraded the image sensors, and there are various features that add to our camera’s quality.”

According to LG, the pixel size on the new phone’s rear camera image sensor has increased from 1 micrometer to 1.4 micrometer. Larger pixels give better low-light performance. The size of the image sensor has also increased by 18 percent compared to the earlier V30 phone.

Cine Shot, also called the Magic Photo feature in Korea, enables users to animate part of a picture. After taking a short video, the phone picks a still picture from the video.

When a user chooses a certain area inside the photo, the Cine Shot mode animates that part of the picture.

“These features can be useful for people who want to upload video files instantly on social networking platforms like Instagram without a difficult editing process,” a spokesperson from LG said.

The V40 ThinQ sports a 6.4-inch OLED FullVision display and a bottom bezel that is 1.6 millimeters thinner than its predecessor. Though it has five cameras, it is slim and light. According to LG, the phone weighs 169 grams (5.9 ounces), lightest among phones with similar or larger display sizes. It is also the first LG phone to have its audio quality tuned by the high-end audio brand Meridian.

Though the phone was introduced, the launch date and prices were not disclosed on Thursday. Hwang said that LG is still deciding the pricing for the phone, but said that it will go on sale within this month.

LG said it decided to offer the phones to thousands of mobile phone retailers across Korea starting on Thursday and set up sites where customers can experience the phone prior to starting sales.

LG’s mobile communications business has been taking losses in recent years. Hwang, however, said the company is planning to launch strategic phones that they have been working on for a long time next year, which could cause the business to eventually turn a profit. Hwang said LG is preparing to launch a 5G-enabled phone by next year and a foldable phone soon, but he did not give a schedule for the releases.