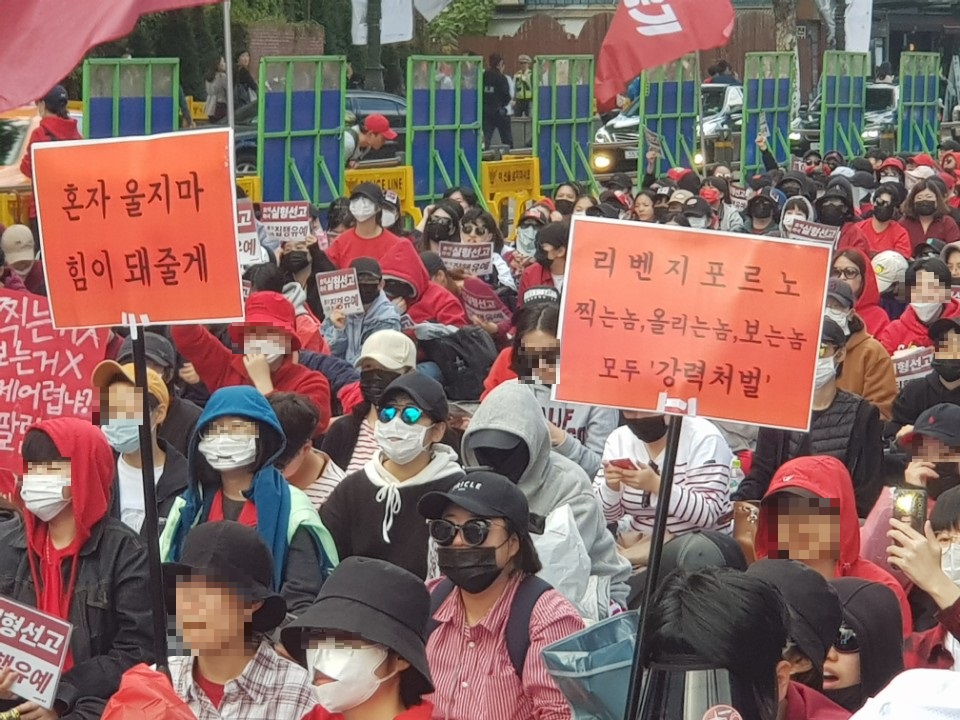 An anti-sexism rally was held Saturday afternoon near Hyehwa Station in central Seoul, the fifth of its kind organized by an internet community on web portal Daum named “Uncomfortable Courage.” Saturday’s rally came after news was released that singer Koo Ha-ra’s ex-boyfriend had allegedly threatened her with sex videos earlier last week.

The Hyehwa Station protests first began in May demanding that police investigations treat male and female criminals equally, after the police arrested a woman in April for posting a picture of a nude male model online. According to the rally’s organizers and participants, men seldom get arrested or punished for the crime of using hidden cameras to film women. The protests have taken place once a month since the first.

Saturday’s rally came after it was revealed by local news outlet Dispatch that Koo’s ex-boyfriend, who is surnamed Choi, had threatened Koo that he would “end her life as a celebrity” by sending two videos of their sexual encounters in September. The video had been taken without Koo’s consent nor her awareness, according to the report. Choi later denied threatening Koo and said the videos were her idea in the first place.

The rally, which was attended by 15,000 people, featured numerous hand-written signs that condemned any blackmailing of Koo, some going so far as to say that Choi should be executed.

During the protest, a male in his 20s pulled out a BB gun, which the police promptly confiscated. The date of the next rally has not been set.