MOON SO-YOUNG
The author is a cultural news editor at the Korea JoongAng Daily. 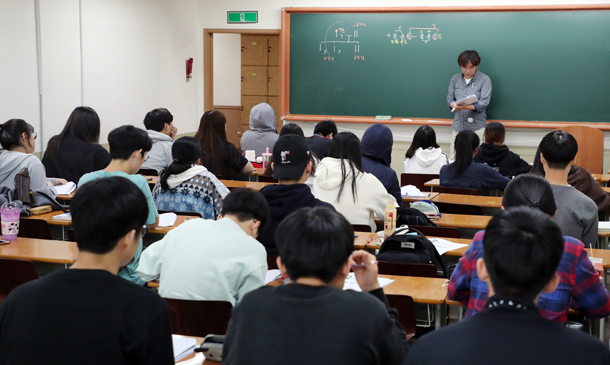 In early September, the Daejeon Metropolitan Office of Education posted a photo of a female student raising her hand in a classroom. Is it a campaign to encourage student participation in class? Surprisingly, it was part of a campaign to prevent school violence. The caption read, “Do not insist on your opinion or show off.” Does that mean one could be punished for speaking up? The office removed the posting and apologized because the public asked if the victims were being blamed for school violence. But it is still shocking that raising your hand to ask a question or to make a comment could be deemed as “showing off” and deserving of violence. I wonder how the office of education came up with that idea?

The Nobel Prize announcement season has returned. It is a season in Korea for the discussion on why there hasn’t been any Korean recipient of a Nobel Prize in science. Of course, the number of Nobel Prize winners is not the only standard of academic research, but Korean education and the absence of a Nobel Prize cannot be overlooked. The quiet classroom where students are coerced to give correct answers and are discouraged from asking questions tramples creativity and diversity.

I am not sure whether this problem originated from the admission-oriented education system or the persecution of differing views in the Joseon Dynasty or a widespread collectivism that does not allow differences. But I have heard about the tragedy of Korean culture from many generations, in which students who ask questions and add comments are viewed as snobs. An essayist in his 50s said that when he once asked why W was called “double-U” when there were two Vs, the teacher got angry and punched him in the face.

A fellow reporter, who had lived abroad and came back to Korea in high school, objected to the corporal punishment for poor test scores at a cram school. But instead of supporting her, other students thought she was overreacting. Now in her 30s, she moved to the United Kingdom and has become a talent sought by the media PR industry there. How about our younger generation? Another reporter in her 20s said that the worst insult she received in middle school was classmates criticizing her for “coming forward too much.”

In this culture, can we become citizens of a liberal democracy that can think for ourselves, question unfairness in society and speak up, much less become a creative talent? Is that possible in a country where an office of education urges students not to be “boastful” in order to prevent school violence?

Your prime minister, my president