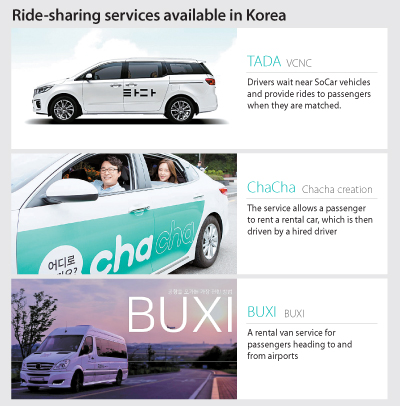 Due to tough government regulations, Korea’s ride-sharing start-ups are resorting to loopholes in the law to do business. The companies face an uphill battle, however, as the taxi industry fiercely opposes them and the government is reluctant to take a flexible stance on the budding industry.

VCNC, best known for Between, a smartphone application for couples, recently unveiled their new ride-sharing platform TADA on Oct. 8. The platform’s launch comes after VCNC was bought by Daum founder and CEO of ride-sharing company SoCar Lee Jae-woong in July.

TADA operates by using vehicles provided by SoCar that are driven by drivers who wait around the area until they are matched with passengers. The company expects consumers to take advantage of the spacious vehicles for trips to the airport or to weddings.

“We started out by thinking of a legal service that can operate within current regulations rather than avoiding them outright,” explained VCNC CEO Park Jaeuk. “By working with current taxi operators, we are planning to launch ‘TADA Assist,’ a service for the disabled and the elderly and ‘TADA Plus,’ a premium taxi service.”

In Korea, the ride-sharing sector is often called the “graveyard of start-ups.” While American ride-hailing and ride-sharing company Uber found great success all over the world, the industry giant ended its popular UberX service in Korea two years after entering the market in 2013 after it was labeled illegal. Korea’s transportation law bans personal vehicles from being provided or rented out for profit.

Start-up Poolus launched a similar service to Uber’s in 2016, but has been charged by the Transport Ministry and the Seoul Metropolitan Government for violating regulations. It has dismissed 70 percent of its employees. Despite the examples of failure in the ride-sharing market, start-ups that see potential in the industry are continuing to try and break into the market.

BUXI is another ride-sharing service that has caught on with passengers heading to airports. For a fee of around 20,000 won ($17.60) per person, passengers can ride in a van to the airport. BUXI explains that the service is different to conventional taxi services, as multiple passengers make reservations at the same time beforehand.

Another start-up, ChaCha creation, operates ChaCha, a ride-sharing service that circumvents regulations as the passenger hires someone to drive a rental car. The company argued that there are no regulations that block someone from hiring a driver for a rental car, so it is a legal service. However, the Transport Ministry announced in July that the service is illegal.

Callbus was initially targeted at providing rides for late-night passengers going in the same direction who weren’t able to find taxis. But due to government regulation and opposition from the transport industry, it has changed to an airport van service and a bus rental service.

The taxi industry is fiercely opposed to the growing number of ride-sharing services. After the launch of TADA, four taxi organizations, including a national taxi union, released a statement criticizing ride-sharing services, “[This] is an illegal act to generate profit by a private business that owns a platform … immediately halt [this], as it could kill the taxi industry.”

In a Facebook post, SoCar CEO Lee called for changes to regulations saying that everyone loses with the current system.

“The current transportation policy and regulation is based off a structure that only hurts everyone and leads to an accumulation of losses ... there needs to be a change in the structure by making sustainable new rules,” he wrote.