Director Zhang Wei’s movie “The Rib” depicts the conflict between 32-year-old Huanyu, who wants to have sex-reassignment surgery, and her Christian father, who strongly believes that changing one’s gender is an unforgivable sin. The film sheds light on the struggles felt by transgender people who strive to live normal lives. [BIFF]

Transgender identity remains a hotly contested issue across the world, particularly in socially conservative countries such as China.

Director Zhang Wei’s film “The Rib” revolves around a transgender woman’s struggle to be embraced by Chinese society.

It tells the story of 32-year-old Huanyu (Yuan Weijie), who is trying to win her single father’s approval to undergo sex-reassignment surgery. “The Rib” sheds light on Huanyu’s fierce conflict with her father, a devoted Christian who believes that changing one’s sex is an unforgivable sin.

While placing the pair’s conflict at the center, the director also sheds light on the struggles faced by transgender women. Huanyu’s transgender friends wish to walk down the street without receiving judgmental glimpses, use a woman’s bathroom without causing any fuss and not lose a job over their gender identity.

Zhang also directed “Factory Boss” (2014), which told the story of a boss of a failing factory and his employees in Shenzhen, and “Destiny” (2015), about a mother with an autistic child fighting to help her boy live a normal life. The Chinese filmmaker has been paying attention to amplifying the voices of China’s social minorities.

Zhang, whose artistic inspiration is usually spurred by social news, said “The Rib” was inspired by a news article he read a few years back. As a Christian himself, he was initially very resistant to accept transgender people. Perhaps due to his initial strong resistance to transgender identity, the social issue sparked his interest.

To discuss his latest movie, which premiered at the now-underway 23rd Busan International Film Festival, the director sat down with the Korea JoongAng Daily for an interview. Below are edited excerpts. 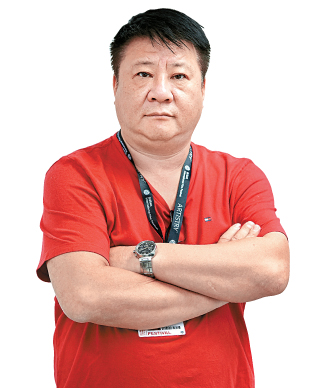 Q. Transgender issues are often regarded as a taboo in China. What was the reason you decided to shine a spotlight toward this issue?

A. Perhaps due to my age and religion, I did not have much knowledge about transgender issues. This lack of knowledge sparked my interest of this issue when I first accessed the news on a Christian mother who openly supported her son, who became a woman. The fact that she embraced her son’s decision despite her religion sparked my interest to pay more attention toward this issue. It took me around three to five years of thorough research and interviews until I could understand their world and ultimately bring out “The Rib.”

Was it a challenging process to have transgender people open up their hearts to hear about their struggles and thoughts?

Fortunately, some of our staff were [transgender], who were able to connect our team with the community in China, both online and offline. Also, we were very careful about how we approached them. Before I met them, I sent our female staff to meet them, and once they built credibility, I joined to ask some questions and hear about their struggles. We also met their friends and families to provide a more holistic view about their lives.

As this is a sensitive topic, you must have been very careful when developing this story. Which part were you most cautious about or paid the most attention to?

What I paid the most attention to was how a Christian father accepts his son’s desperate wish to change his sex while maintaining his beliefs as a devoted Christian. Initially, I myself didn’t accept transgender people. However, my thoughts changed after working on this film, because I now believe that accepting them does not cause my beliefs to fade away.

This is a black and white film. The only color that is added is the red dress that the protagonist wears.

Black and white represents ordinariness - something mundane. By adding the red color on Huanyu’s dress, I hoped to demonstrate her desire and hope in life.