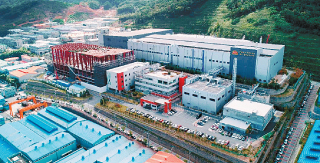 The first batch of products made at the factory in Yangsan, South Gyeongsang, will hit shelves here in late October. Currently, all Heets sold in Korea are imported from Italy. The manufacturing line in Yangsan will be one of six Heets factories worldwide and the only one in Asia. The other five are all located in Europe.

The manufacturing line for Heets is an expansion of Philip Morris’ existing Yangsan factory that has produced more traditional cigarettes for its Marlboro and Parliament brands since 2002.

The company said it does not have concrete plans to export Heets sticks at the moment, but is “positively considering the matter.” The existing Yangsan factory has exported combustible cigarettes to Asian countries in the past including Japan, Australia, Singapore and Taiwan.

During a press event held at the Yangsan factory on Thursday, Kim explained that manufacturing Heets sticks locally has the advantage of reducing costs, especially shipping fees and import tax, and faster adaptability to control supply according to local consumers’ needs.