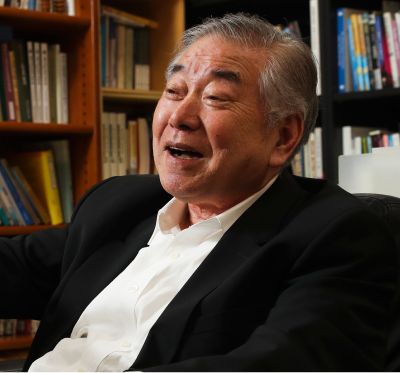 Presidential special adviser Moon Chung-in, a long-time advocate of closer relations with North Korea, discussed the possibility of a denuclearization agreement or a “big deal” between the United States and Pyongyang during two interviews with the JoongAng Ilbo on Sept. 30 and Oct. 4.

The 67-year-old politics professor at Yonsei University has suggested that the United States and North Korea could overcome their differences and build trust with each other by committing to an exchange of surprising proportions in the early phases of negotiations.

With a second summit between the United States and North Korea in the works, observers are pressed to consider the possibility of a deal between the two countries to resolve differences over denuclearization and break the diplomatic impasse that has persisted since the historic summit in Singapore earlier in the year.

Moon shared his thoughts with the JoongAng Ilbo on the possibility of such a deal and the steps towards denuclearization after his visit to Pyongyang last month as part of President Moon Jae-in’s summit delegation.

Q. What do you think of U.S. Secretary of State Mike Pompeo’s latest visit to Pyongyang?

Could the United States saying that they won’t be restricted by time be a sign that they are becoming more realistic?

The American stance has long relied on rewards only after denuclearization, a package settlement and a timed denuclearization process. I think they are taking a more realistic approach rather than standing back from the three points.

Where do you think the second summit between the United States and North Korea will take place?

There are a number of choices, but I think that Panmunjom will be the best. The second summit between the United States and North Korea should happen in Panmunjom, then South Korea or both the heads of South Korea and China could take part in a trilateral or quadrilateral end-of-war declaration. This would be the best for convenience and symbolism.

Do you think Pompeo’s visit to Beijing, after trips to Pyongyang and Seoul, could be directed at discussing a quadrilateral declaration of an end to the war?

I think so. Some believe that China has taken a flexible stance towards taking part in an end-of-war declaration, but as far as I know, this isn’t so. China is a legally-binding party of the armistice agreement, so the Chinese Foreign Ministry has the basic stance that they need to take part in the end-of-war declaration. This has not changed.

What do you think is more likely, a trilateral or quadrilateral declaration to end the war?

North Korea has said that it won’t cling onto the declaration through an editorial in state media. What do you think of this?

North Korea is only reacting that way because the declaration is being treated as something grandiose. The United States is demanding everything, such as inspections, providing a list of facilities and the dismantlement of the Yongbyon nuclear facilities. A new relationship between the United States and North Korea can only start when there is a declaration of an end to the war. The North Korean position is that denuclearization can happen by building trust. It seems [they] have expressed their discontent, as the declaration is being portrayed as everything.

Isn’t the first step to dismantling the Yongbyon nuclear facilities providing a list and allowing inspection and verification?
It can happen concurrently with dismantlement.

What do you make of North Korea’s Foreign Minister Ri Yong-ho’s speech at the UN General Assembly? It emphasized that denuclearization will not take place without trust in the United States?

It’s an expected remark from North Korea’s perspective. The United States is willing to reward [North Korea] for denuclearizing first but North Korea can’t simply trust America’s words and give up their nukes. So they want to first build trust. When I recently went to Pyongyang, I asked a senior North Korean official whether it would be possible to provide a list and receive inspections, just as the United States requests, and then declare an end to the war, [the official] also replied the same way.

If the declaration takes place, will North Korea provide a list of all their nuclear facilities, materials and weapons?

The process of freezing, notification, inspection, verification, dismantlement is advocated by verification fundamentalists. But changes to it are possible. That is why the United States discussed frontloading to first deal with large issues.

North Korea expressed its intent to follow through with the permanent dismantlement of the Yongbyon nuclear facilities. The United States has to then present something in response, but it hasn’t done so. Instead, it says it will continue sanctions and pressure until there is complete denuclearization, resulting in a standstill in negotiations.

What do you think about the criticism that dismantling the aged Yongbyon nuclear facilities does not hold much significance?

As Dr. Hecker noted, dismantling the Yongbyon nuclear facilities is a huge playing card for the big deal. In Yongbyon, there are facilities such as a graphite-moderated reactor, a nuclear fuel production factory, a radiation chemical reprocessing facility and a centrifuge that produces highly-enriched uranium. Yongbyon produces the brightest scientists in nuclear and missile technology.

If the Yongbyon facilities are dismantled, denuclearization will be mostly resolved. Most of all, if the currently operational nuclear production facility in Yongbyon is frozen, further production will stop. By building trust through the Yongbyon nuclear facilities dismantlement process, it will be easier to step into the stages where North Korea notifies all its nuclear facilities, material and weapons and receives inspection and verification.

What do you think about the views in the United States that dismantling Yongbyon is not enough?

That is why I think there is a need for a surprising measure such as a partial disarmament of intercontinental ballistic missiles or nuclear warheads in addition to the dismantlement of Yongbyon nuclear facilities. I think the United States’ emphasis on easing sanctions only after North Korea’s complete denuclearization is also because it is wary of a breakdown of solidarity in the international community.
If North Korea offers a proposition that can’t be refused, the United States will have to go down the path of easing sanctions.

But wouldn’t North Korea ask for something greater than an end-of-war declaration from the United States?

Of course. There will be numerous things such as liaison offices, normalization of relations, a non-aggression pact, easing sanctions, entering the global economic system and social and cultural exchanges, among others. But on what will be exchanged upfront will be determined by the negotiations between North Korea and the United States.

Why do you think President Moon Jae-in is adamant about a declaration to end the war by the end of the year?

There are two reasons. First, it is to create legitimacy for easing sanctions by encouraging North Korea’s denuclearization. Only then will the economic cooperation agreed to between the two Koreas pick up steam. The other [reason] is to move on to the next phase of negotiating a peace treaty to establish permanent peace on the Korean Peninsula.


What did you think of President Moon’s trip to New York in late September?

The U.S. experts I know rated it as the most successful visit to the United States by a South Korean president. As he deals with so much of the nuclear negotiations, Moon has become an expert himself. I think a sense of desperation played a role, as the agreements between the two Koreas could not play out unless sanctions were relaxed through progress on denuclearization.

What about the concerns that inter-Korean relations and U.S.-North Korea relations are not parallel to one another? This could cause friction in South Korea-U.S. relations.

Such concerns have been shown to be baseless by Moon’s recent visit to New York. The inter-Korean summit in Pyongyang played a decisive role in solving the deadlock between the United States and North Korea.

That is why Pompeo is visiting Pyongyang and the second U.S.-North Korea summit is taking place. Just because we talk to North Korea doesn’t mean that there is no understanding or cooperation with the United States.